In the summer of 1990, the Oka Crisis—or the Kanehsatake Resistance—exposed a rupture in the relationships between settlers and Indigenous peoples in Canada.

In the wake of the failure of the Meech Lake Accord, the conflict made visible a contemporary Indigenous presence that Canadian society had imagined was on the verge of disappearance. The 78-day standoff also reactivated a long history of Indigenous people’s resistance to colonial policies aimed at assimilation and land appropriation.

The land dispute at the core of this conflict raises obvious political and judicial issues, but it is also part of a wider context that incites us to fully consider the ways in which histories are performed, called upon, staged, told, imagined, and interpreted.

Stories of Oka: Land, Film, and Literature examines the standoff in relation to film and literary narratives, both Indigenous and non-Indigenous. This new English edition of St-Amand’s interdisciplinary, intercultural, and multi-perspective work offers a framework for thinking through the relationships that both unite and oppose settler societies and Indigenous peoples in Canada.

“St-Amand has a keen eye on how land and its mistreatment are the central motivating factors for the Kanien’kehá:ka resistance, which is important for mainstream Canada to understand when reflecting on 1990.”

“This timely translation and updated edition of Isabelle St-Amand’s La crise d’Oka en récits: territoire, cinéma et littérature (2015) allows her important work to circulate in a new context and reach a wider audience, something especially crucial considering the continued relevance of its topic.”

“Explores new perspectives for how settler, migrant, and immigrant scholars in such areas as Literary, Cultural, or Media Studies might approach the analysis of Canadian Indigenous artistic productions.”

“Future historians and critics studying Indigenous resistance, both at the barricades and through artistic production, will want this book on their shelves.”

“St-Amand asks readers to reconsider our understanding of Canadian history and the role that literature and film can play in assigning meaning to Indigenous-Settler conflict and how we each have a responsibility to learn from conflict in order to build a more equitable relationship between Indigenous peoples and Canada.”

Isabelle St-Amand is an Assistant Professor in the Department of French Studies and the Department of Languages, Literatures, and Cultures at Queen’s University. Her research as a settler scholar focuses on Indigenous literary criticism in Québec and Canada. 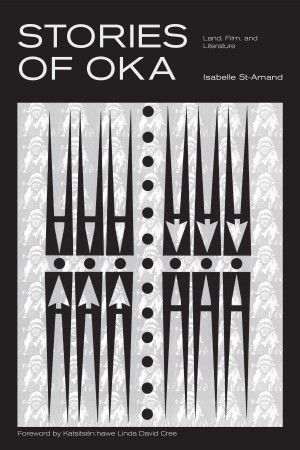