Stories of the House People

Ten Stories of the House People, plains Cree from north of the North Saskatchewan River, told by Peter Vandall and Joe Douquette. In Cree with English translations, Cree-English and English-Cree glossaries and an outline of the writing system. The term wâskahikaniwiyiniwak ‘House People’ was traditionally used for the Plains Cree groups clustering around Carlton House.

The ten stories in this book were told in less than an hour by two storytellers offering a small sample from the wealth of their experience.

Their stories took much longer to write down in the way they are printed here, but it seemed important to us to have a written record that represents the stories exactly as they were told. Nothing has been left out, nothing has been added.

The Cree texts are the heart of this book. The rest—the translations, the glossary, the indices and the outline of the writing system—are secondary. They are included for students of the Cree language and for those who do not speak Cree at all.

These texts may be used in several ways: as a source of real Cree words and sentences for students of the language; for Cree speakers who want reading material in their own language; and as authentic examples of Cree literature.

They also may remind the reader why stories are told in the first place: to reflect the wisdom of the Elders, and to amuse both young and old.

The two old men who told these stories are no longer alive, and neither did Ida McLeod live to see this book. The frontispiece shows Joe Douquette, Ida McLeod, and Peter Vandall (from left to right) at the Saskatchewan Indian Cultural Centre in Saskatoon on February 16, 1982. 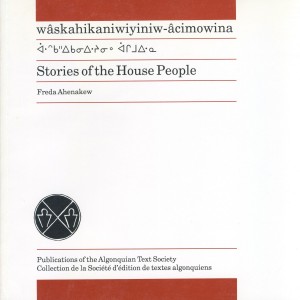