An Indigenous Life and Death in a Canadian City

Structures of Indifference examines an Indigenous life and death in a Canadian city and what it reveals about the ongoing history of colonialism. In September 2008, Brian Sinclair, a middle-aged, non-Status Anishinaabe resident of Winnipeg, arrived in the emergency room of a major downtown hospital. Over a thirty-four- hour period, he was left untreated and unattended to, and ultimately died from an easily treatable infection.

McCallum and Perry present the ways in which Sinclair, once erased and ignored, came to represent diffuse, yet singular and largely dehumanized ideas about Indigenous people, modernity, and decline in cities. This story tells us about ordinary indigeneity in the city of Winnipeg through Sinclair’s experience and restores the complex humanity denied him in his interactions with Canadian health and legal systems, both before and after his death.

Audiobook narrated by Wesley French. Accessible audio resources for this title can be found here.

“You can’t really sugarcoat the colonial genealogy that killed Brian Sinclair. Structures of Indifference is a necessary book. It offers a short, direct framing of the death of Brian Sinclair as a clear instance of racism, a racism that is the basis of Canadian settler colonialism.”

“A short book with a very big story of the continuing effects of settler values, policies, and laws. Brian Sinclair’s death did not happen in a vacuum.”

“McCallum and Perry dive into the dark stain of colonial history in Canada by ripping off the Band-Aid and exposing the racist truth. From Indian Residential Schools, treaties policies designed to promote genocide, to how Winnipeg was settled, this book shows how those structures were set up to fail people like Brian Sinclair.”

“This is a small book, less than 200 pages, but it has a compelling thesis. […] One is to hope that this book is another nail in the coffin of colonialism’s impact on Indigenous people in Canada.”

“In a Canadian hospital in 2008, an Indigenous man was left untreated and unattended for 34 hours and died of an easily treatable infection. A subsequent inquest wrestled with whether to examine systemic racism against Indigenous peoples as a contributing factor in Brian Sinclair’s death, or to focus solely on operational or procedural failures. The historian-authors use inquest documents as their primary archive to analyze how legal processes narrowly define and interpret events to effectively obscure the violence of contemporary settler colonialism. The book situates a global and pervasive history of dispossession and marginalization within a local and specific story of one Indigenous life. McCallum and Perry argue that “health care is not only, and sometimes not even primarily about biomedicine—it is also about assimilation and integration into the Canadian nation state and the annulment of treaty rights and responsibilities, as well as erasure of Indigenous autonomy, identity and ways of life.” A key success is that the authors never lose sight of Sinclair’s complex humanity as a man and family member, and as an urban Indigenous community member within an institution, city, province, and country that too often dehumanizes and ignores Indigenous peoples.”

“An accessible resource, providing undergraduate and graduate students, researchers, historians, and members of the general public a deep and careful study of what the life and death of one man can tell us about the deadly legacy and troubling contemporary prevalence of racism in the Canadian healthcare system.”

Mary Jane Logan McCallum, of the Munsee Delaware Nation, is an professor in the Department of History, University of Winnipeg and is the author of Indigenous Women, Work, and History, 1940–1980.

Adele Perry teaches History and Women’s and Gender Studies at the University of Manitoba, where she is also director of the Centre for Human Rights Research. She is a historian of colonialism in the nineteenth and twentieth-centuries, and her recent work includes Aqueduct: Colonialism, Resources, and the Histories We Remember (ARP, 2016) and Colonial Relations: The Douglas Connolly Family and the Nineteenth-Century Imperial World (Cambridge University Press, 2015). 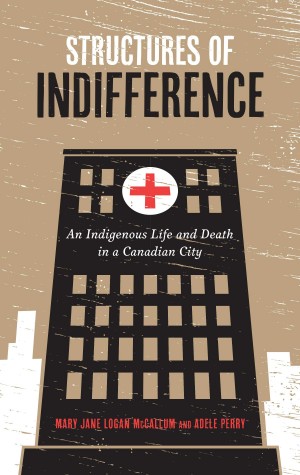