The Cree Language Is Our Identity

Sarah Whitecalf (1919-1991) spoke Cree exclusively, having been raised in the traditional manner by her grandparents. She was well known for her discourses, mainly on Cree culture, which are exceptionally rich and beautiful.

This book records in print Mrs Whitecalf’s spoken responses to questions put to her in January 1990 by a group of teachers; mostly Cree speakers themselves, they were students in a course in Cree language structures which Freda Ahenakew taught for the Northern Teacher Education Program (NORTEP) at La Ronge, Saskatchewan.

The La Ronge Lectures of Sarah Whitecalf differ radically from most other text collections in the indigenous languages of North America: while she freely illustrates her discussion with personal experiences, Sarah Whitecalf’s purpose in these lectures is not to tell stories but to explicate Cree practices and beliefs.

In this book, she deals with diverse aspects of traditional Cree life, ranging from the vegetable dyes used for porcupine-quills to love medicines and their antidotes; she speaks about the sacred pipe and other spiritual matters, such as reliance on owls as spirit messengers; and she also addresses the question whether or not Cree religious practices and the Cree language itself should be taught to Whites. Throughout the book, Sarah Whitecalf stresses the importance of language as the vehicle of culture and identity.

Through the discussions of her traditional life, she stressed the importance of language as a vehicle of culture and identity. In Plains Cree with an English translation and syllabics. Glossary. 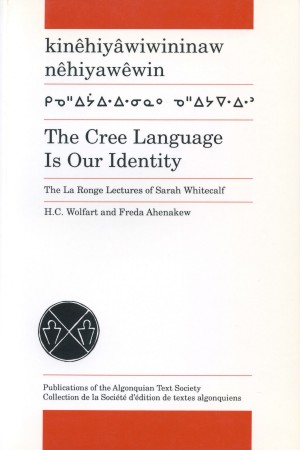