The Edge of the Woods

Drawing on archival and published documents in several languages, archeological data, and Iroquois oral traditions, The Edge of the Woods explores the ways in which spatial mobility represented the geographic expression of Iroquois social, political, and economic priorities. By reconstructing the late precolonial Iroquois settlement landscape and the paths of human mobility that constructed and sustained it, Jon Parmenter challenges the persistent association between Iroquois ‘locality’ and Iroquois ‘culture,’ and more fully maps the extended terrain of physical presence and social activity that Iroquois people inhabited. Studying patterns of movement through and between the multiple localities in Iroquois space, the book offers a new understanding of Iroquois peoplehood during this period. According to Parmenter, Iroquois identities adapted, and even strengthened, as the very shape of Iroquois homelands changed dramatically during the seventeenth century.

In assessing the ways the Iroquois engaged the pressures and opportunities presented by the development of European settler colonies on the periphery of their homelands, The Edge of the Woods relates the Iroquois experience to larger critical conversations about the impact of colonialism on human cultures, polities, and economies—a discourse from which Native Americans are often excluded as agents of change. Recognizing that North American settler colonialism has not only invaded and conquered territorial space but also colonized Indigenous epistemological spaces, Parmenter tells the story of sixteenth- and seventeenth-century Iroquois history from the “inside out.”

To accomplish this, Parmenter compares multiple European accounts of the Iroquois during this period and draws on the physical evidence of the archaeological record through the lens of Iroquois oral traditions. In so doing, the book aims to render articulate some of the many silences of the Iroquois past.

“Parmenter’s grasp of Iroquois history, and the evidence documenting it, is arresting.”

“This was a very complex story to tell, and Parmenter did that with flair and careful scholarship.”

Jon Parmenter is a native of London, Ontario and attended the University of Western Ontario where he earned an Honors B.A. and an M.A. under the direction of Dr. Ian Steele. Following completion of his doctorate at the University of Michigan, he taught for several years at St. Lawrence University before coming to Cornell. He is now an Associate Professor of History at Cornell University where he teaches courses on Early and Native American history. The Edge of the Woods his first book. 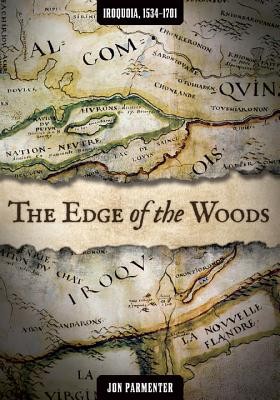