Winnipeg’s North End has informed the Canadian mythology and influenced the national psyche. The North End also divides and defines the city of Winnipeg, shaping its politics and sense of identity. It is here where First Nations and Old and New World immigrants cross the boundaries of ethnicity, class, and culture, creating a complex multicultural community. There is joy here, and pride, and poverty, and richness, and beauty.

John Paskievich grew up in the North End. In these photographs, taken between the mid-1970s and the mid-1990s, he set out to explore the North End he knew in his youth. What he found were traces of it, captured in the stillness in which the past still lingers and in the dignity and singularity of its inhabitants.

This edition is no longer available. Please visit this page to order the new edition.

“Like the films of Guy Maddin and the rock songs of John K. Samson, Paskievich’s photographs capture a world that is both personal and eccentric. His is not the North End as endorsed by the chamber of commerce, but it is nevertheless one marked by dignity and humanity.”

“John Paskievich is a distinguished documentary filmmaker. Some of his work is about people for whom being at home in the world is difficult, impossible or an act of the imagination: Roma in Slovakia, Russians in the Canadian prairies, Inuit artists at home in the North. In The North End, he has performed a similar act of troubled, amused, sympathetic observation, this time with black-and-white photographs, shot over three decades, of people who live and work (or do not work, as the case may be) in Winnipeg’s North End.”

– Avrum Fenson, The Globe and Mail

“Paskievich’s real, unadorned glimpse into the community and its people is striking, but most of the scenes and characters captured here aren’t pretty in the conventional sense. It’s his inclusion of these tarnished details – gritty streets, peeling piont and wrinkled, weary faces – that truly gives the work its unfiltered beauty. Similar to Winnipeg’s North End itself, Paskievish’s new book is a gem that can only be discovered, explored and cherished by a patient and sympathetic eye.”

“Whether sitting, walking, lying, standing, marching, dancing, or simply staring into his lens, Paskievich’s characters steal the show and turn his book of stills into a slide show that moves, informs and entertains from cover to cover.”

“This is gorgeous photo book clearly evokes a time and place, that of Winnipeg’s North End. The ethnicity of the place, the class structure, the culture, the complex state of joy and anguish in this part of the city are all cleverly portrayed in the photos. A visual masterpiece.”

John Paskievich was born in Austria of Ukrainian parents and immigrated to Canada as a young child. He graduated from the University of Winnipeg and studied photography and film at Ryerson University. His photographs have been widely exhibited and published in various periodicals and in several books, including A Voiceless Song: Photographs of the Slavic Lands, introduced by Josef Skvorecky, and A Place Not Our Own. His documentary films have garnered critical praise and won numerous awards. Paskievich lives in Winnipeg.

Other contributors: Introduction by Stephen Osborne 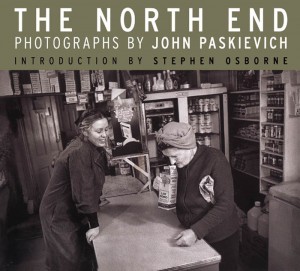