The Orders of the Dreamed

George Nelson on Cree and Northern Ojibwa Religion and Myth, 1823

Among Anglo-Canadian fur traders of the early nineteenth century, George Nelson stands out for his interest in the life and ways of the native people he encountered. In 1823 Nelson was serving as a Hudson’s Bay Company clerk in charge of the post at Lac la Ronge, an outpost of Ile a la Crosse in northeastern Saskatchewan. During that time he kept a letter-journal, addressed to his father, in which he related his observations of Cree and Northern Ojibwa religion and myth. This document is reproduced here for the first time.

The letter journal gives a more detailed portrayal of Algonquian religion than any other source before the twentieth century. In it Nelson described the characteristics of individual spirit beings, the use of the “shaking tent” to facilitate communication between human and spirits, the significance of dreams, religious aspects of medicine, and cosmogonic mythology.

The introduction by Brown and Brightman describes Nelson’s career in the fur trade and explains the influences affecting his perception and understanding of Native religions. They also provide a comparative summary of Subarctic Algonquian religion, with emphasis on the beliefs and practices described by Nelson. Stan Cuthand, a Cree Anglican minister, author, and language instructor, who lived in Lac la Ronge in the 1940s, adds a commentary relating Nelson’s writing to his own knowledge of Cree religion in Saskatchewan. Emma LaRoque, an author and instructor in Native Studies, presents a Native scholar’s perspective on the ethics of publishing historical documents.

Jennifer Brown is professor of history at the University of Winnipeg. An anthropologist and historian, she has written widely on fur-trade social history and ethnohistory.

Robert Brightman is professor of anthropology at the University of Wisconsin. 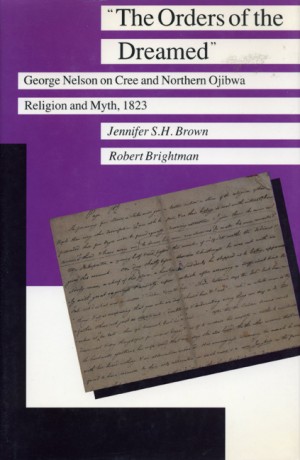