Unity, Morale, and the Second World War in Winnipeg

When the Second World War broke out, Winnipeg was Canada’s fourth largest city: culturally diverse, with strong class divisions, and a vibrant tradition of political protest.

Citizens demonstrated their support for the war effort through their wide commitment to initiatives such as Victory Loan campaigns or calls for voluntary community service. But, given the city’s ethnic and ideological divide, was the Second World War a unifying event for Winnipeg residents?

In The Patriotic Consensus, Jody Perrun explores the wartime experience of ordinary Winnipeggers through their responses to recruiting, the treatment of minorities, and the adjustments made necessary by family separation.

With nearly one in ten Canadians in uniform, the war touched everyone’s lives in some way. In Winnipeg, Perrun argues, unity was enhanced by shared hardships and the effectiveness of both official and unofficial information management.

“The Patriotic Consensus skillfully executed study that provides an important contribution to the growing number of works demonstrating the diversity and complexity of Canada’s war experience.”

“An excellent study on the influences and responses to total war at the local level in Canada through the medium of Winnipeg. By focusing on a microcosm of the nation-state, the diverse voices of the community speak through the pages and the war becomes more real.”

“Winnipeg during wartime comes alive in his masterful narrative that reminds readers that the domestic experience of the Second World War in Canada was not unitary, but was built upon and drew together the fragmented voices of many.”

“Provides a refreshing look at how Western Canada participated in the war effort. Given that Western Canada is often overlooked in histories of the Second World War, in favour of industrial Ontario or dissenting Quebec, it is a valuable addition to the national story of how Canadians experienced the war at home.”

“An original and important scholarly contribution to the literature on Canada’s history during the Second World War.”

“The Patriotic Consensus is a work of local history filtered through the larger geopolitical events of the Second World War. The result is a fascinating look at Winnipeg’s response to national wartime policies.”

“Perrun’s book explores in fascinating detail the notion that the Second World War did much to unite the socially and ethnically diverse communities that comprised Winnipeg. Central to his study are their various responses to the war effort and conscription. He identifies the split along religious and political lines that divided the Ukrainian population itself, the limited role allowed to Aboriginal peoples, and the opposition of the Franco-Manitoban and other communities to conscription. The Patriotic Consensus also provides a historical context for the city’s reputation for charitable generosity and volunteerism by revealing both the high level of contribution of Winnipeggers to the war bond drive and their exemplary level of voluntary community service activities to raise and maintain war morale.”

“What were the reactions of ordinary Winnipeggers during the Second World War? How did they demonstrate their support of the war efforts? At the time Winnipeg had many different ethnic groups and class divisions. This engaging book explores the sudden unification of the inhabitants during this world event.”

“In a city as diverse as Winnipeg, support for Canadian involvement in the Second World War had complex roots. The Patriotic Consensus by Jody Perrun examines the fascinating roots of community involvement, morale, and the personal interest of ordinary citizens to help us more clearly understand the experience of war in Winnipeg.”

“An important contribution to the emerging social history of the Canadian home front. The Patriotic Consensus adds much needed depth to the unavoidable two-dimensionality of national studies, and stands as an important reminder that millions of Canadians perceived the great events of the Second World War through the prism of the local level.”

“A a careful, nuanced, and effective contribution to the evolving scholarship on the history of the wartime home front in Canada.” 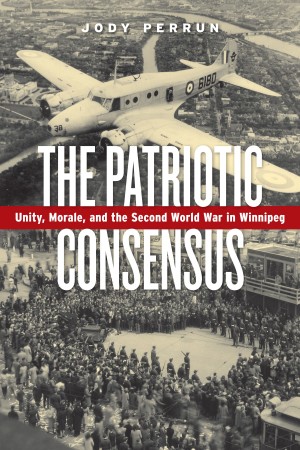