This is a revisionist account of Highland Scottish emigration to what is now Canada, in the formative half century before Waterloo.

The inspiration for this work springs from Bumsted’s reading of a book by Thomas Douglas, Fifth Earl of Selkirk, Observations on the Present State of the Highlands of Scotland, with a View of the Causes and Probable Consequences of Emigration, 1805. Selkirk considered on the one hand that landlords had a right to modernize in line with their Lowland brethren, and on the other, that the people in the Highlands had the right to choose to preserve their age-old customs and life style through emigrating to British North America where land was available in plenty. He supported emigration to the limits of his ability indirectly through argument and directly through private promotion. As a “well-educated product of the Scottish Enlightenment,” Selkirk’s thinking and practice aided the coalescing of ideas into “political economy.” While he had his own ambitions and biases, he had a clear view of the inconsistency of thinking amongst opponents of emigration, which included the Highland and Agricultural Society of Scotland. Though opponents claimed that Highland improvements needed manpower to carry them out, and that emigration would endanger the supply of fighting men and remove labour needed for agriculture and manufacture, no clear solutions were being provided for those dispossessed. They might, according to Selkirk, become town labourers at home, or emigrate and maintain their traditional living ways and their language even in a different environment. Selkirk appears to have been quite sincere in his idealism over the preservation of tradition and language, seeing these even as a means of warding off the pernicious influence of America. He tried his best, at Prince Edward Island, at Baldoon in Upper Canada, and on land provided by the Directors of the Hudson’s Bay Company (which included much of present-day Manitoba). He had varying degrees of success. While Selkirk perhaps worked on a canvas too big for individual control, it is right that he should be both a central figure in, and the inspiration for, Bumsted’s book. 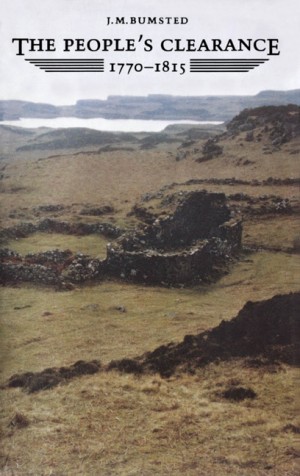