The Politics of the Canoe

Popularly thought of as a recreational vehicle and one of the key ingredients of an ideal wilderness getaway, the canoe is also a political vessel. A potent symbol and practice of Indigenous cultures and traditions, the canoe has also been adopted to assert conservation ideals, feminist empowerment, citizenship practices, and multicultural goals. Documenting many of these various uses, this book asserts that the canoe is not merely a matter of leisure and pleasure; it is folded into many facets of our political life.

Taking a critical stance on the canoe, The Politics of the Canoe expands and enlarges the stories that we tell about the canoe’s relationship to, for example, colonialism, nationalism, environmentalism, and resource politics. To think about the canoe as a political vessel is to recognize how intertwined canoes are in the public life, governance, authority, social conditions, and ideologies of particular cultures, nations, and states.

Almost everywhere we turn, and any way we look at it, the canoe both affects and is affected by complex political and cultural histories. Across Canada and the U.S., canoeing cultures have been born of activism and resistance as much as of adherence to the mythologies of wilderness and nation building. The essays in this volume show that canoes can enhance how we engage with and interpret not only our physical environments, but also our histories and present-day societies.

Watch the recording from the virtual launch on June 8, 2021, here.

“An engaging study of where the canoe finds itself in post Truth and Reconciliation Commission Canada. From being coopted and used by settlers as a symbol of Canadian nationalism, this collection of essays from academics, activists, and community leaders demonstrates how the canoe has been reclaimed by Indigenous people and is being used as a powerful tool for to build Indigenous sovereignty and heal communities.”

“Many of the essays’ authors read Colonialist meanings in the traditional Canadian discourse regarding canoes and argue for a new canoe discourse with First Nations at its center … the theme of “the political canoe” is addressed through varied, even eccentric, approaches, making for mostly diverse and engaging reading.”

“The book’s ten chapters dismantle the idea of the canoe as a national symbol of Canada and identify it instead as a vehicle for decolonization, reconnection with the land, Indigenous cultural resurgence, and reconciliation between settler Canadians and Indigenous peoples.”

“By complicating an iconic symbol of Canada, the collection is challenging people to think about the canoe’s connection to colonization, how contemporary visions reinforce that colonialism, and how to engage in decolonizing the canoe. [The essays] call on us to remember that the canoe is alive and has the potential to help steer all of us towards reconciliation.”

“The Politics of the Canoe, like the books that inspired it, advocates a new, progressive politics of the canoe: one that rejects the old nation-building icon in favour of an ancient, multiform watercraft that speaks to Indigenous accomplishment and Native history.“⁠

“Each of the essays in this volume helps to sustain campfire conversation around the meaning and significance of the canoe.”

“This book is poised to create positive ripples among its readers. It simultaneously appeals to lovers of the canoe and challenges them to examine their assumptions about canoeing as an activity that happens somewhere out there, in “nature,” which many of the contributors remind us is a Euro-colonial construct. Politics of the Canoe is an invitation to learn, and I suggest the editors have accomplished a difficult task: speaking to the non-converted, creating critical conversations, and promoting deeper learning about the canoe and the ways it is tied to our colonial histories.”

Bruce Erickson is an Assistant Professor in the Department of Environment and Geography at the University of Manitoba. His work investigates the cultural politics of recreation and tourism within the context of settler colonialism in Canada and beyond. He is the author of Canoe Nation: Nature, Race and the Making of a National Icon.

Sarah Wylie Krotz is an Associate Professor of English literature at the University of Alberta. Her research explores the complex web of relations among literature, land, and ecological thought. She is the author of Mapping with Words: Anglo-Canadian Literary Cartographies, 1789-1916. 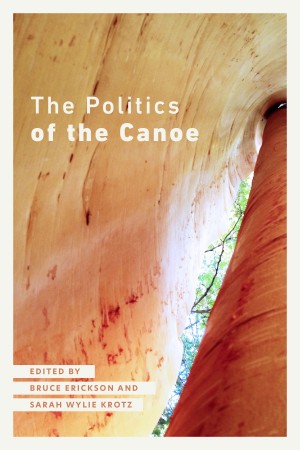