Indigenous Boarding Schools, Genocide, and Redress in Canada and the United States

At the end of the nineteenth century, Indigenous boarding schools were touted as the means for solving the “Indian problem” in both Canada and the United States. With the goal of permanently transforming Indigenous young people into Europeanized colonial subjects, the schools were ultimately a means for eliminating Indigenous communities as obstacles to land acquisition, resource extraction, and nation building. Andrew Woolford analyzes the formulation of the “Indian problem” as a policy concern in the United States and Canada and examines how the “solution” of Indigenous boarding schools was implemented in Manitoba and New Mexico through complex chains that included multiple government offices, a variety of staff, Indigenous peoples, and even nonhuman factors such as poverty, disease, and space. The genocidal project inherent in these boarding schools, however, did not unfold in either nation without diversion, resistance, and unintended consequences.

Because of differing historical, political, and structural influences, the two countries have arrived at two very different responses to the harms caused by assimilative education. Inspired by the signing of the 2006 Residential School Settlement Agreement in Canada, which provided a truth and reconciliation commission and compensation for survivors of residential schools, This Benevolent Experiment offers a multi-layered, comparative analysis of Indigenous boarding schools in the United States and Canada.

“This important book, which students, scholars, and policy makers in the US and Canada should read, is a testament to the quality of the work and the still limited understanding of its subject in both countries. Woolford provides a nuanced account of the inception, intention, and impacts of boarding schools for Indigenous peoples in North America. Far more than compiling a catalog of abuses, he offers a critical assessment of settler colonialism, its targeting of Native nations for elimination and later assimilation, the place of education in such efforts, and more recent calls for redress and justice. Woolford rightfully places boarding schools and the experience of Indigenous people in dialogue with the increasingly sophisticated literature on genocide. While boarding schools have received much scrutiny, Woolford deserves praise for his comparative history. It allows a fuller understanding of boarding and residential schools in each country, while highlighting the common patterns and processes uniting them. Of special note, the book offers a compelling interpretation of the differing paths toward redress in the US and Canada, stressing a combination of discursive, political, and structural elements.”

“This Benevolent Experiment is a must-read for the experts and students of North American history and Native Americans alike.

“There is much to praise in this remarkable book. Woolford’s contributions are threefold: his comparative analysis of the United States and Canadian systems, his analysis of the nature and levels of the settler-colonial mesh, and his arguments for redress.”

“The residential schools in Canada and the US are a source of shame—so many lives lost and ruined, so many hearts broken. Andrew Woolford does us all an important service in pulling together the stories and the scholarship proving that they really were a genocidal experiment perpetrated against First Nations in the interests of theft on a massive scale. A must read.”

“Andrew Woolford’s outstanding book offers fresh contributions to the field of Indigenous and settler colonial studies. His comparison of the Indian boarding schools in the United States with their Canadian counterparts yields new insights into both. He provides a sophisticated and probing analysis of whether these schools constituted genocidal policies and practices. This is a top-notch piece of scholarship that should enrich our scholarly—and national—debates for decades to come.”

– Margaret Jacobs, author of White Mother to a Dark Race and A Generation Removed

“Canadians are unaccustomed to thinking of their own history in terms of genocide and yet this book makes a compelling case that we should do just that. When we recognize that culture sustains life, Woolford argues, we understand the genocidal impulse and effects of residential schooling. Applying insights from genocide studies to the histories of residential schooling in Canada and the United States, this book will provoke scholarly debate and add a new layer of complexity to the discussion of Canada’s history and its relations with indigenous peoples.”

“I highly recommend Andrew Woolford’s book to those wanting to understand more about the schools, policies, and ideas that led up to their creation, and the settler colonial mesh that tried to immerse the students in a context that would take them out of their identities, and which provided the vehicle and fuel to allow this to occur for such a long period of time.”

“This Benevolent Experiment is a welcome contribution for scholars in the fields of education, Indigenous Studies, and genocide studies. It is also an important text for mainstream society because it sheds light on not only the terrible history of Indigenous boarding schools in North America, but also the consequences of them, and how that legacy exists in the present.”

Andrew Woolford is a professor of sociology at the University of Manitoba and the author of This Benevolent Experiment: Indigenous Boarding Schools, Genocide, and Redress in the United States and Canada. 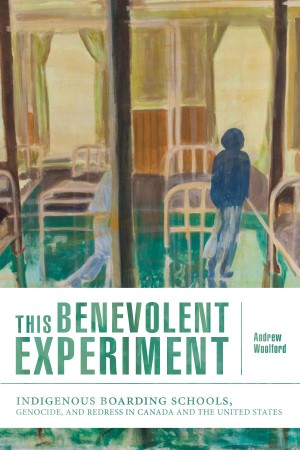