The Hidden Life of Vilhjalmur Stefansson

Vilhjalmur Stefansson has long been known for his groundbreaking work as an anthropologist and expert on Arctic peoples. His three expeditions to the Canadian Arctic in the early 1900s, as well as his expertise in northern anthropology, helped create his public image as an heroic, Hemingway-esque figure in the annals of twentieth-century exploration. But the emotional and private life of Stefansson the man have remained hidden, until now.

New evidence of this other life has recently been discovered: a collection of love letters between Stefansson and his fiance Orpha Cecil Smith were found in a New Hampshire flea market; Stefansson’s field diaries have revealed elegant essays and insightful commentary on Inupiat society; baptismal records have revealed that Stefansson had a son, Alex, with his informant and guide, Fanny Pannigabluk; and through Web searches and a private detective, Palsson found and conducted interviews with the descendents of both Cecil Smith and Alex Stefansson.

Travelling Passions sheds new light on Stefanssonís life and work, focussing on the tension between his private life and the theories that brought his name to the halls of fame. Palsson draws a clear, vivid, and in many ways unexpected picture of the mythical figure of Stefansson.

“A forthright but carefully nuanced exploration of the enigmatic explorer.”

“For those ‘serious students’ of Arctic literature this book is a must read. And for those whose knowledge of Arctic exploration history goes a little beyond popular works, Travelling Passions offers an enjoyable and rewarding experience in its revelations about the personal life of this latter-day explorer, and how Stefansson helped shape so much of Western society’s view of the Arctic and its peoples.”

Gisli Palsson was born and raised in the Westman Islands, a fishing community south of mainland Iceland. He is the author, editor, or co-editor of 15 books, including Writing on Ice: The Ethnographic Notebooks of V. Stefansson, Nature and Society: Anthropological Perspectives, and The Textual Life of Savants: Ethnography, Iceland, and the Linguistic Turn. In April 2000, he was awarded the Rosenstiel Award in Oceanographic Science at the Rosenstiel School of Marine and Atmospheric Science, University of Miami, for excellence in the field of marine affairs. He is currently a professor of anthropology at the University of Iceland. 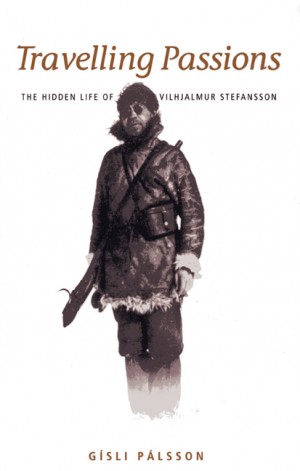