The 2016 Manitoba election campaign began after more drama than any in the past two decades. A focus on trust, leadership, and the PST supported voters’ desire for change, and resulted in the landslide election of Brain Pallister’s Progressive Conservatives after nearly seventeen years of NDP government.

Understanding the Manitoba Election 2016 offers an early analysis of the campaign and insights into the decision that Manitoba voters made on April 19.

A team of twenty-seven experts—academics, policy analysts, and journalists—followed the campaign and contribute not just to a post-election review, but also to the major discussions that will permeate provincial life over the next four years.

Whether it’s regarding the political parties, social, economic, and cultural organizations, public institutions, or key policy areas, these essays—available as an open-access e-book two weeks after the election—contribute to a strengthened understanding of our province.

Published in association with the University of Manitoba’s Duff Roblin Chair in Government.

Karine Levasseur is an Associate Professor in the Department of Political Studies at the University of Manitoba.

Andrea Rounce is an Associate Professor in the Department of Political Studies at the University of Manitoba.

Barry Ferguson is the Duff Roblin Professor of Manitoba Government at the University of Manitoba.

Royce Koop is an Associate Professor in the Department of Political Studies at the University of Manitoba. 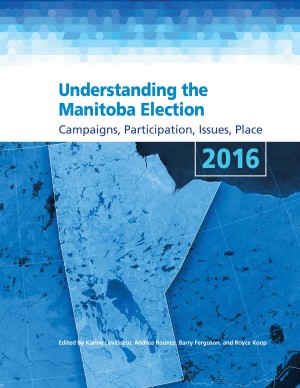