From the Swimming Hole to Sunnyside, How a City Learned to Love the Beach, 1850-1935

Undressed Toronto looks at the life of the swimming hole and considers how Toronto turned boys skinny dipping into comforting anti-modernist folk figures. By digging into the vibrant social life of these spaces, Barbour challenges narratives that pollution and industrialization in the nineteenth century destroyed the relationship between Torontonians and their rivers and waterfront. Instead, we find that these areas were co-opted and transformed into recreation spaces: often with the acceptance of indulgent city officials.

While we take the beach for granted today, it was a novel form of public space in the nineteenth century and Torontonians had to decide how it would work in their city. To create a public beach, bathing needed to be transformed from the predominantly nude male privilege that it had been in the mid-nineteenth century into an activity that women and men could participate in together. That transformation required negotiating and establishing rules for how people would dress and behave when they bathed and setting aside or creating distinct environments for bathing.

Undressed Toronto challenges assumptions about class, the urban environment, and the presentation of the naked body. It explores anxieties about modernity and masculinity and the weight of nostalgia in public perceptions and municipal regulation of public bathing in five Toronto environments that showcase distinct moments in the transition from vernacular bathing to the public beach: the city’s central waterfront, Toronto Island, the Don River, the Humber River, and Sunnyside Beach on Toronto’s western shoreline.

Join us for the launch of Undressed Toronto Wednesday, October 13, at 7:00 p.m. CDT in person at McNally Robinson or online on Youtube for the simultaneous live-stream.

“Undressed Toronto is a gem of a book providing insightful analysis of modernity through the focus on the body and public bathing in Toronto, where local people struggled with slippery zones of surveillance.”

“Undressed Toronto is a brilliant, fresh take on a subject that few other historians would consider worthy of consideration, one that sheds light on important processes of class and gender formation, environmental development, and popular cultural practices.”

“Undressed Toronto immerses the reader in the intriguing world of public bathing, exposing the historical relationship between the city’s waterbodies and its human bodies. From the harbour to Sunnyside, from the Don to the Humber, Dale Barbour deftly demonstrates that Toronto’s past debates about the “beach” are every bit as revealing as the choice of swimwear.”

Dale Barbour grew up on a farm in Manitoba, and worked in journalism and communications before getting hooked on history. He completed his PhD in history at the University of Toronto in 2018 and is currently the University of Winnipeg’s H. Sanford Riley Postdoctoral Fellow. 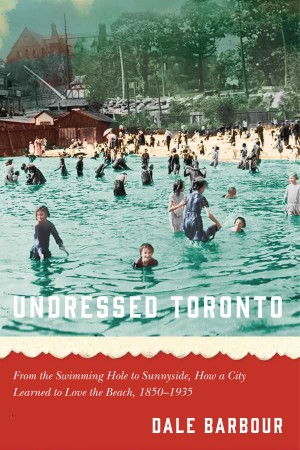