We’re Going to Run This City

Stefan Epp-Koop’s We’re Going to Run This City: Winnipeg’s Political Left After the General Strike explores the dynamic political movement that came out of the largest labour protest in Canadian history and the ramifications for Winnipeg throughout the 1920s and 1930s. Few have studied the political Left at the municipal level—even though it is at this grassroots level that many people participate in political activity.

Winnipeg was a deeply divided city. On one side, the conservative political descendants of the General Strike’s Citizen’s Committee of 1000 advocated for minimal government and low taxes. On the other side were the Independent Labour Party and the Communist Party of Canada, two parties rooted in the city’s working class, though often in conflict with each other.

The political strength of the Left would ebb and flow throughout the 1920s and 1930s but peaked in the mid-1930s when the ILP’s John Queen became mayor and the two parties on the Left combined to hold a majority of council seats. Astonishingly, Winnipeg was governed by a mayor who had served jail time for his role in the General Strike.

“Provides an apt and condensed introduction to a key moment in the prairie city’s ongoing development and shows the groundwork this event laid for politics in the following decades.”

“For the first time the reader has a more comprehensive picture of the political culture stimulated by the events of the 1919 Winnipeg General Strike.”

“In We’re Going to Run This City, Stefan Epp-Koop infuses a potentially dry subject with colour and wit in his lively academic history of Winnipeg left-wing civic politics between the two world wars. These were watershed years in shaping the city’s political character, and Epp-Koop performs a useful and informative service in shedding light on the personalities and ideas that inform the dialectic between left and right to this day.”

“Stefan Epp-Koop’s We’re Going to Run This City lays out how Winnipeg’s leftist politics didn’t end with the General Strike of 1919. This is an approachable history that wears its impressive research easily. Full of intriguing personalities, it makes for a surprising and compelling story, even for readers without an interest in history, or so they think.”

“This is a well-researched, highly engaging and well-told story of the political aftermath of the Winnipeg General Strike in 1919, a traumatic event in the history of Winnipeg which, the author argues and demonstrates, affected the political life of the city to this day.”

“This book examines in illuminating detail the aftermath of the largest labour protest in Canadian history—Winnipeg’s General Strike of 1919—and its effect on city politics in the two decades that followed. Although the Strike galvanized the Left, it also reinforced Winnipeg’s deep ethnic, class, and political divisions. In readable and jargon-free prose, Epp-Koop explores a neglected but significant chapter in the history of Canada’s most radical and activist city.”

“While the political ground in Winnipeg shifted after the 1919 General Strike, Winnipeg workers continued to struggle. After the Strike, electoral politics took on a new significance and, although labour had been defeated in the streets, it was unbowed and potentially able to unite at the polls. This book ably explains the issues that motivated the city’s workers, the impressive scale of labour’s electoral support, and why substantial change through municipal electoral action proved so challenging. Epp-Koop effectively explores the hurdles they faced due to continued, often furious, opposition from business, a punishing economic and fiscal context, opposition from the provincial government, the constraints of municipal politics, and the political labour movement’s own divisions. This book fills an important void in our understanding of social relations in this class and ethnically divided, and warring, city.”

“While focusing on one city’s municipal politics, Epp-Koop’s work is relevant to the larger history of the left in the 20th century.”

“A well-written and important study.”

“A serious and detailed study of the post-strike period in Winnipeg’s municipal politics, extending in to the 1930s.”

Stefan Epp-Koop received an MA from Queen’s University, has won numerous awards for his scholarly work, and is the program director of Food Matters Manitoba. 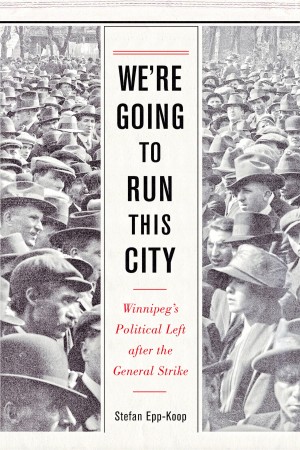