There are two Icelands. One is the island in the North Sea, occupied since before the arrival of the Vikings. The other is “Western Iceland,” the communities throughout North America, settled by Icelandic immigrants in the 19th and 20th centuries, and still maintaining strong ties to their mother country. While the prominent role of women in the development of Western Iceland has long been acknowledged, there is little recognition of their contribution to its literary life.

This collection of short stories and poems spans 75 years of writings. It includes translated work by little-known authors such as Undina, “a modest poet,” as well as works in English by prominent writers such as Laura Goodman Salverson, twice a winner of the Governor-General’s Award. From the hopefulness of the early immigration in the 1870s to the conflict of assimilation in the 1950s, the pieces reflect a range of experiences common to immigrant women from many cultures.

Writings by Western Icelandic Women includes many works translated for the first time from their original Icelandic, and rescues from obscurity the voices and experiences of women as they struggled in a new country. It offers insight into the many obstacles, both personal and professional, that faced these pioneering writers. An introduction by Kirsten Wolf provides a literary and historical context, and is complemented by photographs and brief author biographies.

Kirsten Wolf is professor and chair of the Icelandic Department at the University of Manitoba. She has edited Gyndinga Saga, Saga heilagrar ‘nnu, and Dorotheu saga, has been involved in Medieval Scandinavia: En Encyclopedia, and is co-translator and co-editor of an earlier anthology, Western Icelandic Short Stories. 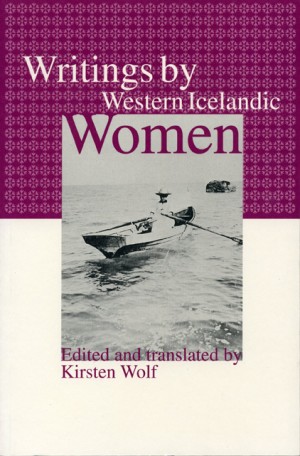