Please join us for the virtual launch of Pathways of Reconciliation: Indigenous and Settler Approaches to Implementing the TRC’s Calls to Action. 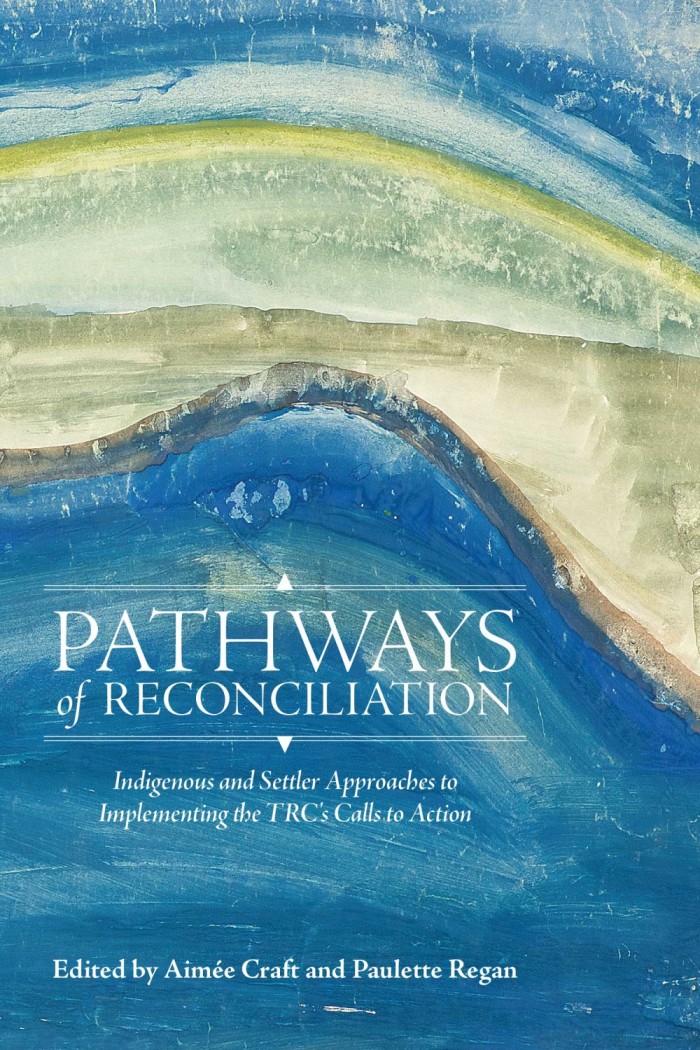 This event is being sponsored by the University of Manitoba’s Institute for the Humanities.

Send questions or comments to: Ariel.Gordon@umanitoba.ca.

Since the Truth and Reconciliation Commission released its Calls to Action in June 2015, governments, churches, non-profit, professional and community organizations, corporations, schools and universities, clubs and individuals have asked: “How can I/we participate in reconciliation?”

Recognizing that reconciliation is not only an ultimate goal, but a decolonizing process of journeying in ways that embody everyday acts of resistance, resurgence, and solidarity, coupled with renewed commitments to justice, dialogue, and relationship-building, Pathways of Reconciliation helps readers find their way forward.

Together the authors — academics, practitioners, students and ordinary citizens — demonstrate the importance of trying and learning from new and creative approaches to thinking about and practicing reconciliation and reflect on what they have learned from their attempts (both successful and less successful) in the process.

Paulette Regan is an independent scholar, researcher, public educator and co-facilitator of an intercultural history and reconciliation education workshop series. Formerly the research director for the Truth and Reconciliation Commission of Canada, she was the senior researcher and lead writer on the Reconciliation Volume of the TRC Final Report. Her book, Unsettling the Settler Within: Indian Residential Schools, Truth Telling and Reconciliation in Canada (2010) was short-listed for the 2012 Canada Prize.

Régine Uwibereyeho King is an associate professor in the Faculty of Social Work, University of Calgary. She has a PhD in Social Work and an MEd in Counseling Psychology and Community Development from the University of Toronto. She also has post-doctoral training in social aetiology of mental illness from the Centre for Addiction and Mental Health, University of Toronto. Her research interests focus on psychosocial processes involving survivors of organized and structural violence, who resettle in their former communities and those who become refugees in high income countries. Her local and international research projects build on many years of front life work experiences in community-based organizations serving the marginalized both in Canada and in Rwanda. She is a community-based researcher with special interests in narrative inquiry, oral history, and interpretive research methods. Dr. King is committed to social justice, human rights, non-violent practices, and healthy communities.

Sheryl Lightfoot is Anishinaabe, a citizen of the Lake Superior Band of Ojibwe, enrolled at the Keweenaw Bay Indian Community in Baraga, Michigan. She is an associate professor in School of Public Policy and Global Affairs, First Nations and Indigenous Studies and the Department of Political Science, and Canada Research Chair in Global Indigenous Rights and Politics, at the University of British Columbia. She is also senior advisor to the UBC President on Indigenous Affairs. Her book, Global Indigenous Politics: A Subtle Revolution, was published in May 2016 by Routledge Press in their “Worlding Beyond the West” critical international relations book series.

David B. MacDonald is from Treaty 4 territory, and is a full professor and the research leadership chair for the College of Social and Applied Human Sciences at University of Guelph. He has held faculty positions at the University of Otago (New Zealand) and the Graduate School of Management (Paris, France). He has a PhD in International Relations from the London School of Economics. His work focuses on comparative Indigenous politics in Canada, Aotearoa (New Zealand), and United States. He has also worked extensively in the areas of international relations, American foreign policy, Holocaust and genocide studies, and critical race theory. He is the principal investigator (with co-researcher Sheryl Lightfoot) on multiyear Insight Grant through the Social Science and Humanities Research Council of Canada entitled “Complex Sovereignties: Theory and Practice of Indigenous-Self Determination in Settler States and the International System.” He is a mixed race (Indian and white) political scientist whose mother is from Trinidad. He is the author of The Sleeping Giant Awakens: Genocide, Indian Residential Schools, and the Challenge of Conciliation (University of Toronto Press, 2019).

Andrea Walsh is an associate professor in the Department of Anthropology at the University of Victoria. She is a visual anthropologist and curator who specializes in twentieth-century and contemporary Indigenous art and visual culture in Canada, as well as theoretical and methodological approaches to visual research. Her work critically reflects on and addresses discourses and actions of reconciliation and redress regarding relationships between Indigenous peoples and Canada. She works in partnership with elders and residential school survivors and their families to repatriate children’s artworks created in residential and day schools and educate the public about this history through art exhibits. In 2019 she curated “There is Truth Here: Creativity and Resilience in Children’s Art from Indian Residential and Day Schools,” an exhibit at the Museum of Vancouver.

About the Institute for the Humanities

The Institute addresses the needs and interests of researchers in a broad range of subject including literature and languages, film and visual culture, philosophy, history and religion, and also the literary, philosophical, theological and historical aspects of the social and physical sciences, mathematics, the arts, and professional studies. It also supports an annual graduate fellowship worth up to $5000.

UMIH supports two or three research clusters and two or three research affiliates. The Institute is located within the Faculty of Arts but is intended to serve the entire Humanities constituency in the University and the general community. The Institute is accordingly committed to community outreach through programs and lecture series for the general public. UMIH is involved in various interdisciplinary, humanities-themed research initiatives.

For more information about the UMIH and its programming, please visit http://umanitoba.ca/faculties/arts/departments/humanities/ or follow us on Facebook.

« RaiseUP and Indigenous Voices in Canada