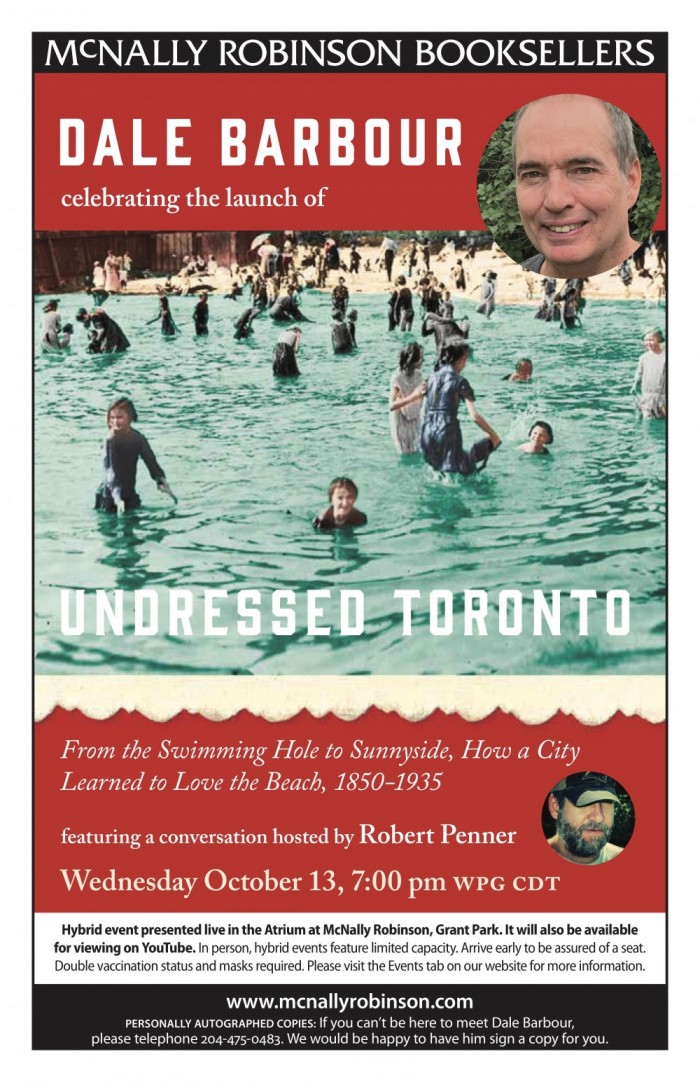 Join us as we celebrate the launch of Undressed Toronto: From the Swimming Hole to Sunnyside, How a City Learned to Love the Beach, 1850-1935 by Dale Barbour. The event hosted by McNally Robinson features a conversation with host Robert Penner, historian and fiction writer.

The launch will be hosted live in the Atrium of McNally Robinson Booksellers, Grant Park and also available as a simultaneous YouTube stream. The video will be available for viewing thereafter. Before arriving, please review details of how to attend physical events at the store.

Undressed Toronto looks at the life of the swimming hole and considers how Toronto turned boys skinny dipping into comforting anti-modernist folk figures.

While we take the beach for granted today, it was a novel form of public space in the nineteenth century and Torontonians had to decide how it would work in their city. To create a public beach, bathing needed to be transformed from the predominantly nude male privilege that it had been in the mid-nineteenth century into an activity that women and men could participate in together.

Undressed Toronto challenges assumptions about class, the urban environment, and the presentation of the naked body.

Dale Barbour, writer, historian, is the author of Winnipeg Beach: Leisure and Courtship in a Resort Town, 1900-1967 and recipient of the University of Winnipeg’s Riley Postdoctoral Fellowship.

Host Robert Penner is an historian (PhD, Duke University, 2012) and a fiction writer (Strange Labour, Radiant Press). He has recently returned to Winnipeg after a long sojourn in the United States.

« RESCHEDULED Did You See Us? VIRTUAL LAUNCH