40 Years of Publishing on the Prairies

It’s University Press Week, which is a fun project of the Association of American University Presses, which includes more than 130 academic publishers across North America. To celebrate, and in anticipation of UMP’s 50th anniversary in 2017, we agreed to write a Throwback Thursday (or #TBT) blog post, that included 40 years of books, catalogues, and ephemera, from 1967-2007.

Little did we know that “throwbacking” would involve several descents to UMP’s basement storage space as well as demanding that longtime staff members rifle through their file cabinets, desk drawers, and cupboards. The photo shoot alone involved ten or more trips up and down the stairs as books, catalogues, and archival photos were assembled, arranged, and photographed before being hauled back to UMP’s offices. The good news? We found print copies of books and catalogues that current staff members hadn’t seen before and discovered the Wayback Machine, an internet archive, that has multiple versions of UMP’s website. As we shifted around boxes and flipped through books, we realized just how many titles UMP printed from 1967-2007.

We also gained—and regained—a respect for the work of the editors and production managers and designers and copyeditors and marketing staff that worked here in the decades before we joined the press. 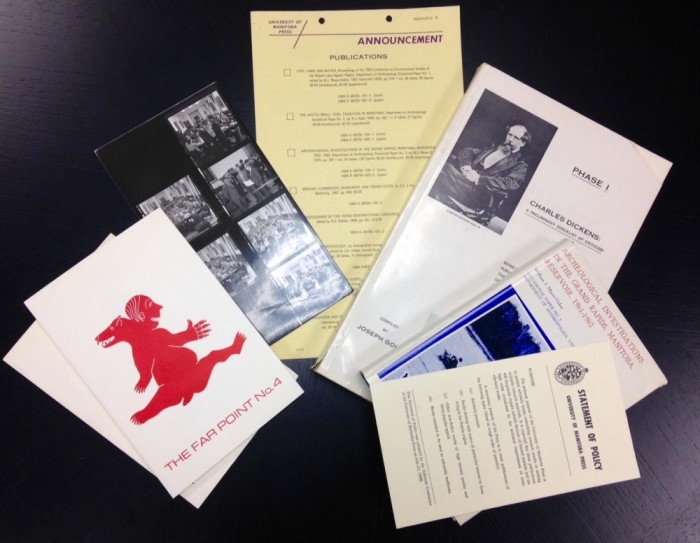 From “A Statement to Senate, September 1979” by Patricia Dowdall Lagace: “The imprint of the University of Manitoba Press has been used for various publications of the university for thirty years, but it was not until 1967 that an Editorial Board was established and an active publishing program was begun. The Press then became the first university press to be established outside Ontario and Quebec. Under Professor Gordon Leckie, the Press published thirteen titles between 1967-1974, and it was becoming known among scholars, both nationally and internationally. However, with the financial constraints of the 1970s, Manitoba, like several other presses, had to retrench and eventually cease publishing altogether.” Support for the Press remained strong on campus, however, and an active publication program was restarted four years later. 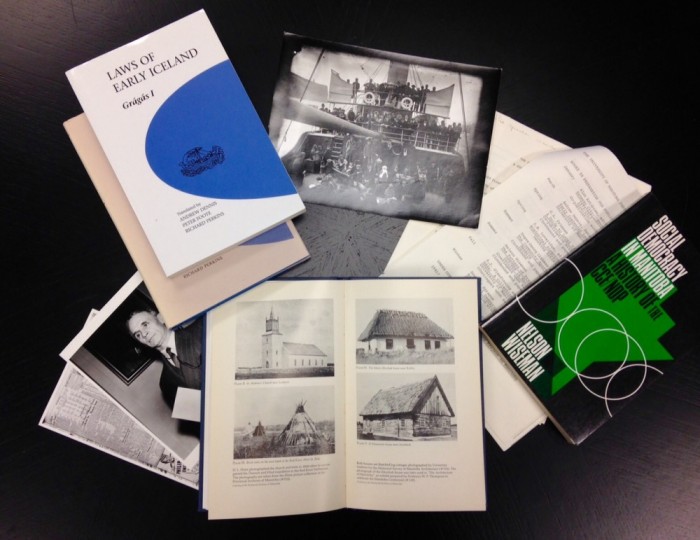 From “The University of Manitoba Press: A Progress Report” by Patricia Dowdall Lagace: “The University of Manitoba Press resumed its publication program in November 1978. Much of the following year was devoted to planning an effective publication program, organizing the Press to make the efficient use of its resources, and assessing publication proposals. A permanent Press Board was appointed in the fall of 1979, and its first meeting was held in January 1980.” The U of M Iceland series is established in this period. 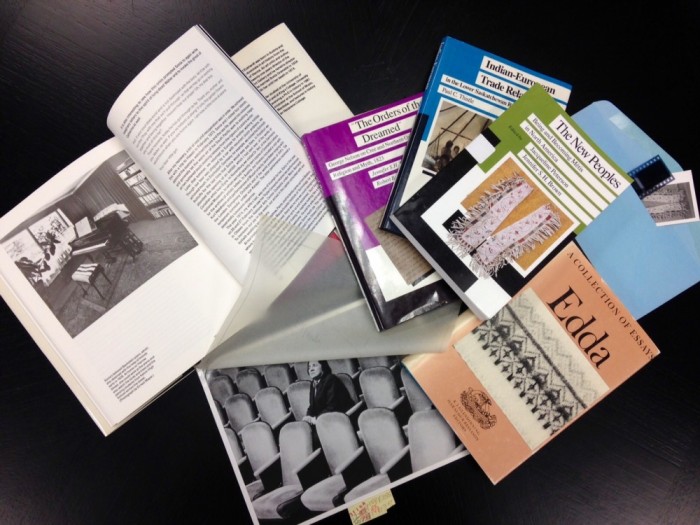 Titles from the mid-to-late 1980s. The Manitoba Studies in Native History series, now called the Critical Studies in Native History, is established. The first book released in the series is The New Peoples: Being and Becoming Metis in North America, edited by Jacqueline Peterson and Jennifer S.H. Brown. This book has been reprinted many times since 1985. 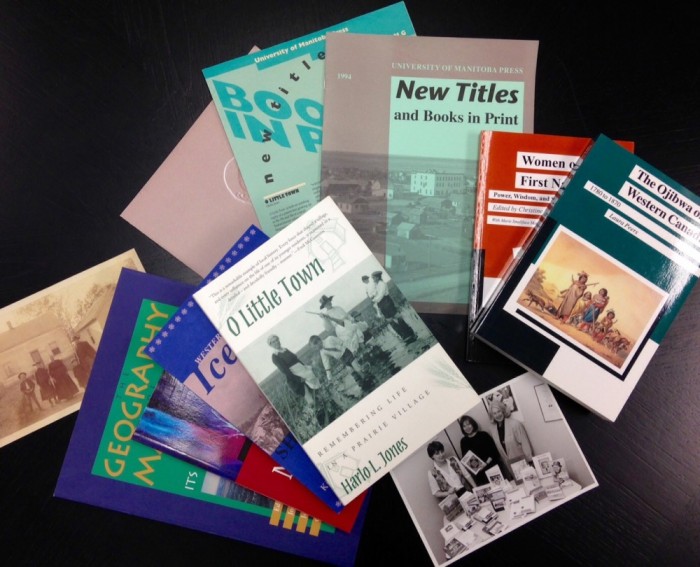 Titles from the early 1990s. The Publications of the Algonquian Text Society series is established. The first book is wâskahikaniwiyiniw-âcimowina Stories of the House People, edited and translated by Freda Ahenakew. UMP staff in the lower right photo are (l-r) Allison Campbell, Patricia A. Dowdall, and Carol Dahlstrom. 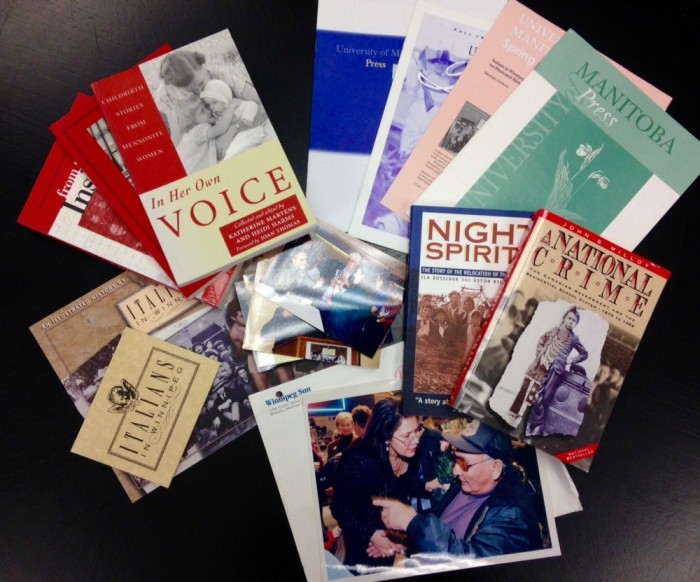 From the Fall 1998 catalogue: “Founded in 1967, the University of Manitoba Press publishes books for both general and scholarly audiences. This year, we are pleased to announce that we now represent selected titles from the Minnesota Historical Society Press, Manitoba Record Society, and the Museum of Man and Nature.” The bottom right photo is of Ila Bussidor and Ronnie John Bussidor from the October 1997 launch of Night Spirits. 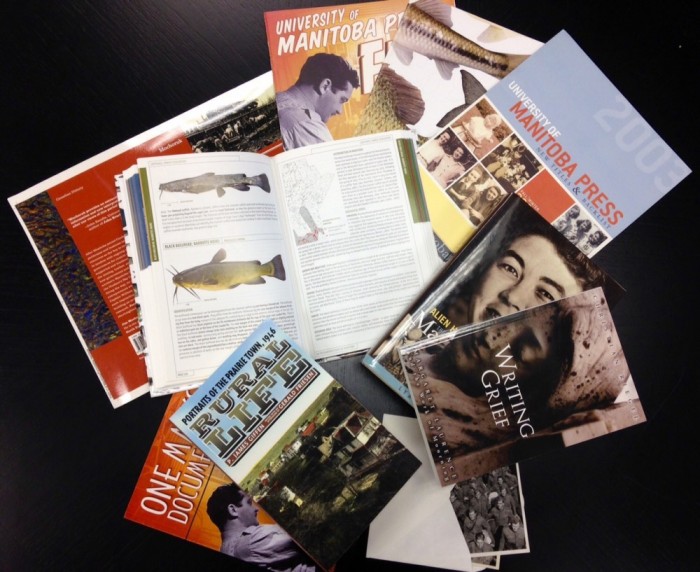 From the 2003 catalogue: “Since the University of Manitoba Press was founded in 1967, we have worked to give readers the best in new writing and research. We are especially proud of our books on Native history and Aboriginal languages. We hope that books such as John Milloy’s ground-breaking history of residential schools—now in its fourth printing—or Michael Angel’s thoughtful look at the richness of the Midewiwin tradition, have contribute to the important national dialogues that engage all Canadians. Our list also continues to expand into new areas, including biography and literary criticism. This year, we are delighted to publish a major new biography of one of Canada’s most-beloved writers, Margaret Laurence, written by her life-long friend Lyall Powers.” 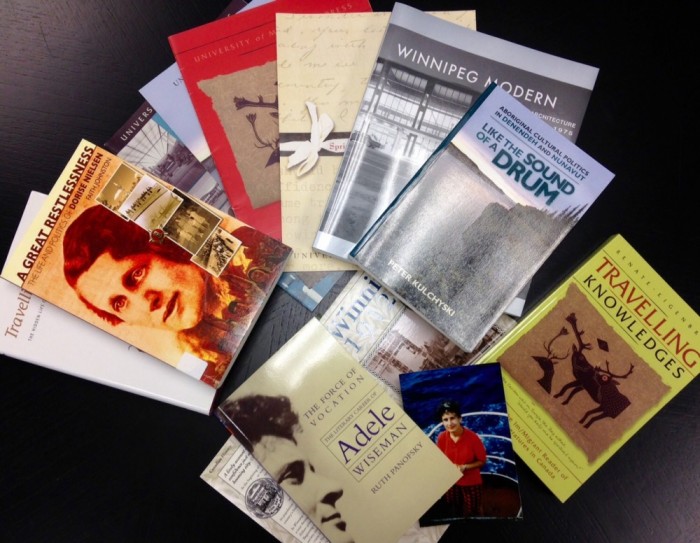 Titles until 2007, which takes us to 40 years since UMP was founded. Two new series are announced: Contemporary Studies on the North and Studies in Immigration and Culture, edited by Royden Loewen.