On 18 January 1906 more than one hundred worshipers congregated in Winnipeg’s most unusual church, “Bishop” Seraphim’s “tin can cathedral,” which had appeared at the corner of King Street and Stella Avenue in the North End sixteen months earlier. (L.B. Foote’s photo of this event appears on page 5 of Imagining Winnipeg.)

Most of those who crowded into the bizarre edifice were Ukrainian (or Ruthenian as they still identified themselves) Greek Catholic and Greek Orthodox believers who had recently emigrated from the Austrian crownlands of Galicia and Bukovyna. 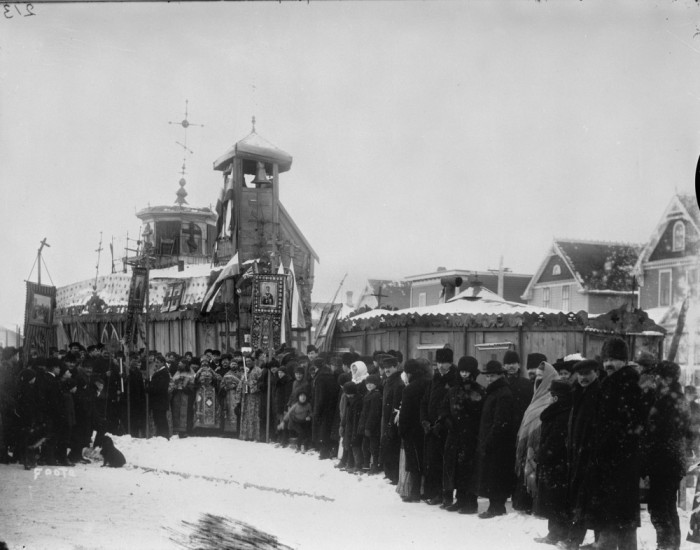 It was the feast of Epiphany and like all Eastern Christians they had come to commemorate Jesus’s baptism in the Jordan River. After the liturgy, Seraphim, several priests, and the congregation were photographed in front of the building. Then they marched with crosses and banners east along Stella Avenue to Main Street, north to Selkirk Avenue, and east to the frozen banks of the Red River where an eight-foot high cross was carved out of the ice and water blessed and distributed to the faithful. The unusual spectacle, which attracted curiosity seekers already familiar with Seraphim’s cathedral, was chronicled by the local press.

One of many vagabond priests who came to North America without authorization prior to the Great War, Seraphim was born Stefan Ustvolsky in 1858 near Arkhangelsk, Russia. A graduate of the St. Petersburg theological academy, he had been defrocked in 1883 and only readmitted into the service of the Russian Orthodox Church as a monk in 1901. In the fall of 1902, after visiting Mount Athos, Jerusalem, and Damascus, Ustvolsky appeared in New York City purporting to have been consecrated a missionary bishop for North America.

Unable to attract a following in the United States, where he had been welcomed and then dismissed by Ukrainian Greek Catholics embroiled in bitter disputes with Irish Roman Catholic bishops, Ustvolsky made his way to Winnipeg in early 1903. At the time, there were no Ukrainian Greek Catholic or Greek Orthodox priests in the city, and even devout Ukrainian Greek Catholics resented Roman Catholic Archbishop Adélard Langevin’s efforts to place them under the jurisdiction of his church and clergy. Seraphim responded by ordaining cantors, deacons, teachers and others for a small fee into the priesthood of what he called the “All-Russian Patriarchal Orthodox Church,” popularly known as the Seraphimite church. A charismatic preacher, his decision to ordain poor and humble men like those whom Christ had selected as Apostles also helped win adherents. Because Church Slavonic was the liturgical language in the Eastern rite Catholic and Orthodox Churches of Austria and Russia, many immigrants were not inclined to draw distinctions between their churches and Seraphim’s.

By the fall of 1903, Seraphim had thousands of followers in the three Prairie provinces and a small chapel on the east side of Winnipeg’s McGregor Street between Manitoba and Pritchard Avenues served as the movement’s headquarters.

The rapid growth of Seraphim’s church in 1903-04 stirred the established churches into action. In November 1903 Ukrainian Greek Catholics sent two Basilian Fathers to Winnipeg. By early 1905, with Archbishop Langevin’s financial aid, they had erected St. Nicholas church on the northwest corner of McGregor Street and Stella Avenue, and that fall, they established a parochial school. In 1904 and 1905, Archbishop Tikhon Beliavin, primate of the Russian Orthodox mission in North America, visited Winnipeg and helped Ukrainian, Belarusian and Russian immigrants to establish the Holy Trinity Russian Orthodox congregation on the northeast corner of McKenzie Street and Manitoba Avenue. The most devastating blow to Seraphim came in the fall and winter of 1904-05 when his most able priests defected and announced the formation of the Independent Greek Church (1904-13), a hybrid institution launched with the support of local Presbyterians that temporarily retained the Eastern liturgy while introducing Protestant teachings. When the defectors gained control of the chapel on McGregor Street, Seraphim began to build his “cathedral” using tobacco tins, discarded windows, bricks and lumber, and pipes, barbed wire, bed frames, and stair rails from a nearby scrap yard.

The photograph was taken just as Seraphim’s moment in the sun was coming to an end. He had already been exposed as an imposter by the Russian Orthodox hierarchy and no Eastern Orthodox patriarch recognized his canonicity. Ukrainian Greek Catholic and Russian Orthodox missionaries were arriving to look after the spiritual needs of Eastern rite Christians. Above all, Seraphim’s fondness for alcohol, his confrontations with street urchins bent on demolishing his “cathedral,” and the questionable behaviour of some of his priests, deprived him of what little credibility he still possessed. As the number of his followers dwindled, he tried to sell his cathedral in May 1907. In February 1908 he left Winnipeg for the last time, apparently bound for California from where he may have returned to Russia.

If you liked the return of the Favourite Foote Photos, there are more to come in the weeks ahead by U of S Native Studies scholar Adam Gaudry, the Winnipeg Free Press‘ Melissa Tait, UMP’s Sales and Marketing Supervisor David Larsen, Getty photographer Marianne Helm, and U of M Indigenous Services Librarian Camille Callison.

This is all to celebrate Imagining Winnipeg’s nomination for the On the Same Page programme.