We traveled from the Siberian city of Omsk along a busy highway only to turn off on a gravel road that wound its way south and east towards the area of Siberia where my father was born and grew up, where my grandmother died and was buried, a site I had often imagined when my father told stories about his childhood.

Siberia was a place I knew, but only in a surreal sense as the setting for many of my father’s stories. 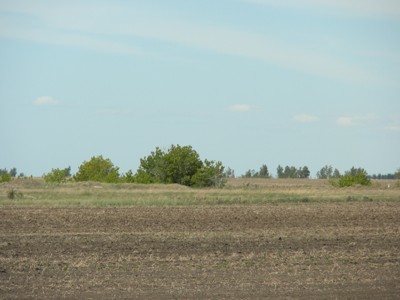 It was somewhat disconcerting to be traveling through the landscape on this very hot June day in 2010.

We had started out fairly early in the morning and arrived in the small city of Slavgorod in the late afternoon.

The road was parallel to, but occasionally switched from, one side to the other of the railway tracks that connected some of the prominent places in my father’s stories—Omsk, Slavgorod, Kulunda.

Traveling to Annanevka a day or two later in my host’s car was also quite disconcerting. Hurtling down a paved but poorly maintained road in Mercedes Benz seemed incongruous with the images of Stalinist Soviet Union that I had grown up with.

We were traveling to Annanevka, one of the only two villages that remained from the small collection of villages known as the Paschnaja villages, to meet someone who might take us to the area of the former Grigorevka, the village of my father’s childhood.

The landscape reminded me of southwestern Saskatchewan—salt lakes and endless plains. I had not anticipated the emotions that would be aroused when I stood looking out over the vast emptiness to a small clump of shrubs, which the Low German-speaking former Mennonite guide explained was likely the cemetery for the village of Grigorevka and quite possible the burial place of my grandmother, who had died in 1943 when living conditions in the Soviet Union had descended into depths of suffering for its people.

After touring more the area and meeting the few Mennonites who had stayed behind after the massive migrations to Germany of the 1990s, we traveled back to Omsk…and the landscape of my father’s memories and stories became part of my memories.

I could not help but wonder how my experience of the place that I had only known through his stories would shape how I told the story.

About The Constructed Mennonite

John Werner was a storyteller. A Mennonite immigrant in southern Manitoba, he captivated his audiences with tales of adventure and perseverance. With every telling he constructed and reconstructed the memories of his life. John Werner was a survivor. Born in the Soviet Union just after the Bolshevik Revolution, he was named Hans and grew up in a German speaking Mennonite community in Siberia. As a young man in Stalinist Russia, he became Ivan and fought as a Red Army soldier in the Second World War. Captured by Germans, he was resettled in occupied Poland where he became Johann, was naturalized and drafted into Hitler’s German army. There he served until captured and placed in an American POW camp. He was eventually released and then immigrated to Canada where he became John. The Constructed Mennonite is a unique account of a life shaped by Stalinism, Nazism, migration, famine, and war. It investigates the tenuous spaces where individual experiences inform and become public history; it studies the ways in which memory shapes identity, and reveals how context and audience shape autobiographical narratives.

Hans Werner will launch The Constructed Mennonite on Wednesday, May 1, at McNally Robinson Booksellers. The event starts at 7:30 pm.

Hans Werner teaches Mennonite Studies and Canadian History at the University of Winnipeg. He is the author of Imagined Homes: Soviet German Immigrants in Two Cities. John Werner was his father. View books by Hans Werner.