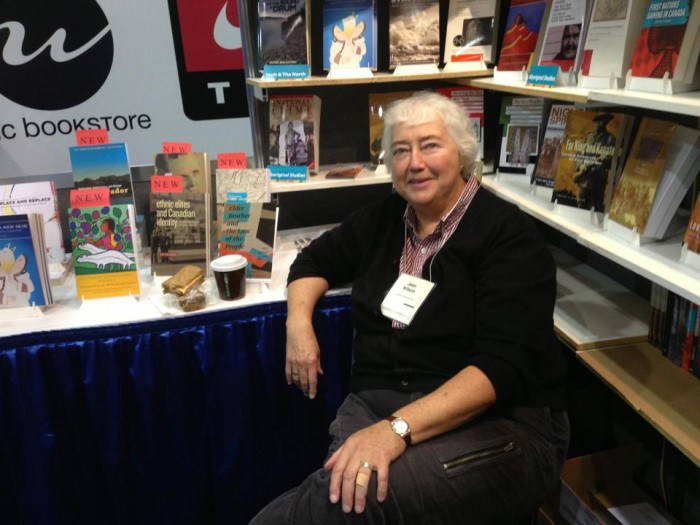 Jean Lenore Wilson was a reader, an editor, a friend, a partner, and beloved to many. Born in Foremost, Alberta, in 1945 to Marian Macdonald and John Laught Wilson, an RCMP constable, Jean attended school in Edmonton and then studied English and French literature at the University of Alberta. A course with Eli Mandel encouraged an interest in Canadian Literature and led to a master’s degree at the University of Saskatchewan with a thesis on the poetry of Al Purdy.

Jean’s career in Canadian scholarly publishing spanned three university presses and hundreds of books. In 1968, the legendary Francess Halpenny hired her as a trainee copy editor at the University of Toronto Press where she worked until 1976. She took pride in having been the youngest person ever to join that celebrated editorial department. Yearning for greater freedom, she spent twelve years freelancing and living in feminist and lesbian cultural communities in Toronto and Vancouver and on Galiano Island, where she lugged huge packages of proofs to and from the rural post office. Jean moved to Vancouver to live with Carmel Chambers who was her partner for twenty-three years until her death in 2009.

In 1988, Jean joined University of British Columbia Press where she began acquiring new titles, many of which won awards. As senior editor and associate director, Jean drew on her exceptional people skills and connections in the scholarly community. She played a key role in rebuilding the Press’s reputation, while earning personal recognition as a scholar of western Canadian history. She will be remembered for building UBC Press’s renowned list in Indigenous studies and establishing the Press’s groundbreaking Sexuality Studies series.

Jean’s contribution to Canadian publishing and cultural life was profound. She was a founding member of the Editors’ Association of Canada, an adjunct professor at Simon Fraser University, and president of the Association of Book Publishers of British Columbia. Long a feminist activist, Jean helped launch the Broadside newspaper and the journal, Room of One’s Own, and for many years was the review editor for BC Studies and a member of its editorial board.

After retiring from UBC Press in 2008, Jean took a part-time role as editor and consultant at the University of Manitoba Press. She loved working on new projects in her studio overlooking Cordova Channel near Sidney in the home she shared with her longtime friend, Jane Ogle Hastings.

Jane and Jean were married in a joyous Quaker celebration on April 27, 2013, but, on December 8, Jean suffered a devastating hemiplegic stroke that left her unable to talk, write, or otherwise communicate in words. With Jane’s unwavering support and through her own herculean efforts, Jean relearned how to walk and to cope with the frustration of thoughts that could never be spoken. Her intellect was undiminished, and she continued to read voraciously, attend concerts and lectures, and live in a home filled with books, music, laughter, and friends – also graced by a cat named Jesse.

After a decade of struggling to overcome the impact of the stroke and then several months of losing ground due to illness and recurring hospitalizations, Jean held hard to the promise that she could, through MAiD, take control of her own destiny. With the loving support of Jane, Jean took her leave on February 6, 2022.

In lieu of flowers, please consider a donation in Jean’s memory to organizations supporting music or working for the environment.