Why do individuals from the Métis Nation choose to not go to traditional ceremonies? How does going to ceremonies impact Métis identity?

These are some of the questions explored in a new book launched Thursday evening — Rekindling the Sacred Fire: Métis Ancestry and Anishinaabe Spirituality, by University of Manitoba Native Studies professor, Chantal Fiola. Her book researches the relationship specifically between the Red River Métis and Anishinaabe spirituality, and how they intertwine to impact an individual.

During the launch Chantal discussed how her book stemmed from her doctoral research (totalling 430 pages) and her personal search for spirituality as a Métis woman. She was raised as a devout Roman Catholic but felt a disconnect, it was while studying in Ontario she chose to first experience Anishinaabe spirituality.

“I found myself wondering where are the other Métis people? It would be nice if I could have role models, other Métis people who participate in ceremonies. So I started asking around and a common response was, oh no, Métis people go to church, only First Nation people go to ceremony. I wasn’t satisfied with that answer so I kept searching and so began the process of my dissertation research.”

Chantal believes that the effects of Christianity and colonial legislation, such as the Indian Act, continue to have an influence on Métis identity and the relationship and understanding of Anishinaabe spirituality.

“A consequence of this history is that many Métis and other Aboriginal people who are disconnected from these ways worry that we don’t have a right to participate in ceremonies and feel unsure of seeking them out. This book is an effort to expose and counter that history and these all too common worries.” 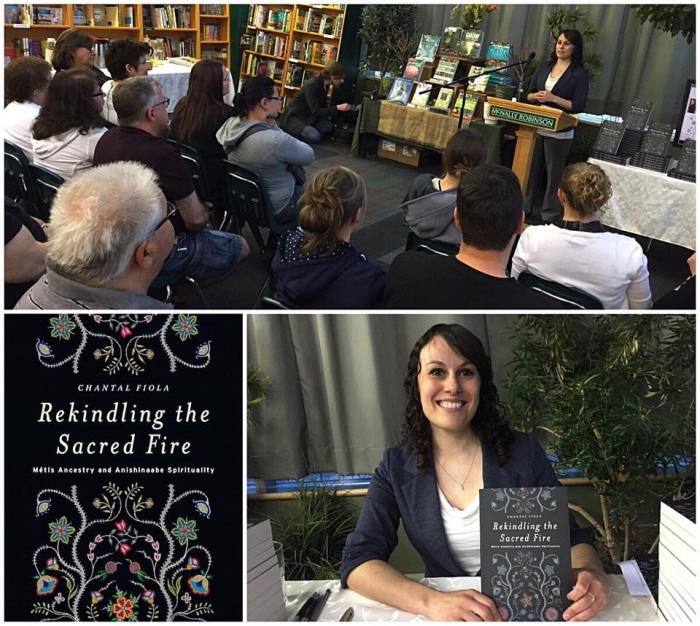 “Our ancestors worked hard to ensure that these ways would still be here for us today. And despite all odds they succeeded.”

Rekindling the Sacred Fire: Metis Ancestry and Anishinaabe Spirituality is published by University of Manitoba Press and was launched at McNally Robinson Booksellers.

Missed it? Another launch is scheduled for Saturday, May 9th, 2-4pm at Neechi Commons, 865 Main Street, in Winnipeg.

Great stories are sometimes gifted to those who can tell them yo : )

David McLeod is a member of the Pine Creek First Nation, with family roots also in the Métis settlement of Camperville MB. His writing has appeared in several anthologies, including Let the Drum Be My Heartbeat and Manitowapow: Aboriginal Writings from the Land of Water (Highwater), as well as in the chapbooks and CD produced by the Indigenous Writers Collective. In 2001, McLeod won the Winnipeg Centennial Library’s inaugural spoken word contest, and has since brought his particular mix of humour and political commentary to many stages. He has extensive experience in radio and television, and works in management at NCI-FM.

« Merle Massie at the SBAs!