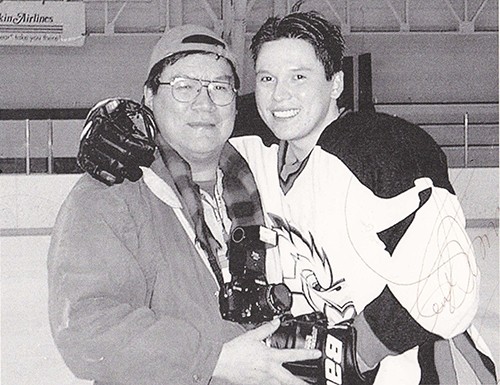 Indians Don’t Cry_ author George Kenny has generously allowed the University of Manitoba Press to use two of his unpublished poems for our blog. Today I am honoured to share “Williams Lake” with you.

Dada, he would leave me
By myself on certain nights
When he was away
Checking his traplines
For fur wearing animals

Even at my young age
I could shoot a .22 rifle
And I could have shot the red fox
But how could I harm
My then only friend

Early in the morning
While eating bannock
I heard the best sound
In my life then
Snowshoes breaking crusted snow;

Dada, he was coming back
From the traplines
With lots of fur bearing animals
To trade at the Hudson’s Bay store
On Lac Seul

And home would be found
After a day’s walk on snowshoes
Across the frozen lake to Kejick Bay
Where Mama would be waiting
With hot tea for my dada and me.

George Kenny is from Lac Seul First Nation in northwestern Ontario. He is currently completing a masters degree in Environmental Studies so that he can continue to write about the culture of Anishinaabe people of Lac Seul and the English River, the source of his creativity. View books by George Kenny.

« World War One in Winnipeg