Historical Encounters with Peyote and the Native American Church in Canada

In 1956, pioneering psychedelic researchers Abram Hoffer and Humphry Osmond were invited to join members of the Red Pheasant First Nation near North Battleford, Saskatchewan, to participate in a peyote ceremony hosted by the Native American Church of Canada.

Inspired by their experience, they wrote a series of essays explaining and defending the consumption of peyote and the practice of peyotism. They enlisted the help of Hoffer’s sister, journalist Fannie Kahan, and worked closely with her to document the religious ceremony and write a history of peyote, culminating in a defense of its use as a healing and spiritual agent.

Although the text shows its mid-century origins, with dated language and at times uncritical analysis, it advocates for Indigenous legal, political and religious rights and offers important insights into how psychedelic researchers, who were themselves embattled in debates over the value of spirituality in medicine, interpreted the peyote ceremony. Ultimately, they championed peyotism as a spiritual practice that they believed held distinct cultural benefits.

A Culture’s Catalyst revives a historical debate. Revisiting it now encourages us to reconsider how peyote has been understood and how its appearance in the 1950s tested Native-newcomer relations and the Canadian government’s attitudes toward Indigenous religious and cultural practices.

“A fascinating glimpse of psychiatry’s encounter with peyote and First Nations cultures, Fannie Kahan’s A Culture’s Catalyst is by turns patronizing and sympathetic, supportive and paternalistic. On one level Kahan’s collection of essays by cutting-edge mental health experts is both a critique of colonialism and a defense of their own embrace of psychoactive treatments. On a deeper level it is an intriguing illustration of First Nations’ savvy appropriation of elite power and influence to protect cultural and religious rites. It will definitely find a place on my bookshelf and syllabus.”

“Offers valuable insights into two intersecting cultural worlds. On one hand it illuminates a moment in the history of the Native American Church as it was taking shape in Canada in the 1950s. On the other it illuminates the culture of the mid-century psychiatrists and other scholars who became interested in peyote through their work on psychedelic substances. This book is not a history of the Peyote religion or of the Native American Church in Canada. Nor does it reflect twenty-first century scholarly approaches to the study of First Nations and Native American history and traditions. But it is a fascinating historical document in its own right, and Dyck has done us all a favor by editing and introducing it so skillfully.”

“In 1956, several non-Indian scientists attended a Native American Church (aka peyotism) service in Saskatchewan and wrote sympathetic depictions of the ceremony. In 1963, a journalist gathered those writings into a book-length manuscript, composed introductions to the peyote religion, and submitted the work, unsuccessfully, for publication. Finally, the manuscript has found print. Why were these white men on hand for an all-night rite in which peyote was ingested amid solemn song and prayer? Because the Indians—Stoney, Cree, and Crow—wished to employ “scientific credibility” in their defense against Canadian anti-peyote laws. Frank Takes Gun, then president of the international branch of the NAC church, was a canny solicitor of positive commentary about his faith, and he chose for the job men committed to religious freedom and intrigued by psychedelic-induced spirituality. Their essays interpreted peyotism as a heroic expression of cultural survival following centuries of white oppression. Though the tone of the essays is paternalistic, the writers’ analysis has been corroborated by scholarship over the past half century. Far from being a dangerous narcotic cult, peyotism provides mystical experience, nativist solidarity, and moral uplift in a church setting combining Christian and indigenous religious form and values.”

“An extraordinary and unreservedly recommended study.”

Erika Dyck is a historian of health, medicine, and Canadian society at the University of Saskatchewan and Canada Research Chair in the History of Medicine.She is the author of Psychedelic Psychiatry: LSD on the Canadian Prairies. Visit Erika’s website. 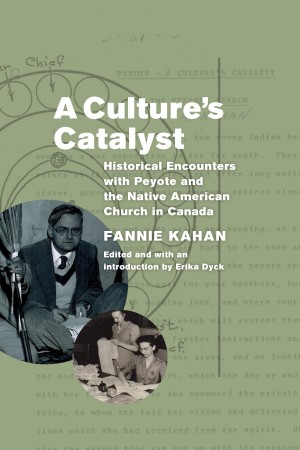