The Life and Work of Margaret Laurence

Margaret Laurence remains one of Canada’s best-known and most beloved writers. Twice winner of the Governor General’s Award for fiction, she was, as the late William French wrote, “more profoundly admired than any other Canadian novelist of her generation.”

Lyall Powers is both a respected scholar of literature and a lifelong friend of Laurence’s, having met her when they were students together at Winnipeg’s United College in the 1940s. Alien Heart is the first full-length biography of Margaret Laurence that combines personal knowledge and insights about Laurence with a study of her work, which often paralleled the events and concerns in her own life.

Drawing on letters, personal correspondence, journals, and interviews, Lyall Powers discusses the struggles and triumphs Laurence experienced in her efforts to understand herself in the roles of writer, wife, mother, and public figure. He portrays a deeply compassionate and courageous woman, who yet felt troubled by conflicting demands. While Laurence’s work is not directly autobiographical, Powers illustrates how her writing expressed many of the same dilemmas, and how the resolution her characters achieved in the novels and stories had an impact on Laurence’s own life.

Powers provides an in-depth analysis of all Laurence’s work, including the early African essays, fiction, and translations, and her books for children, as well as the beloved Manawaka fiction. The study clearly shows the progression and expression of Laurence as a writer of great humanity and conscience.

“A multidimensional portrait … Alien Heart is now the best book on Laurence and her achievements.”

“An ambitious literary biography that blends Laurence’s life with in-depth readings of her work. Power’s accounts of Laurence’s African years and his interpretations of the African works are especially thorough.”

“… a thoughtful, exhaustively researched, and carefully argued interpretation of both the life and the work that diminishes neither and illuminates both.”

“… a ‘must read’ for Laurence fans and scholars alike. … Lyall Powers has added immensely to our appreciation and understanding of Margaret Laurence, as woman and as writer demonstrating her great gift of ‘writing the self into being.’”

“Fascinating…Alien Heart is a touching, definitive examination of the intersections in Margaret Laurence’s life and her writing, deeply researched and considered by Lyall Powers, who knew her well.”

“A splendid appraisal of Margaret’s life and works. Lyall Powers has brought a fresh perspective and a unique viewpoint to Laurence’s fiction.”

“Lyall Power’s long friendship with Margaret Laurence gave him the bedrock base for this affectionate, sensitive and generous biography, one for which she herself would have been deeply grateful. He has expertly woven Laurence’s works and her life into one seamless tapestry in a way that no one else could have.”

– Clara Thomas, author of The Manawaka World of Margaret Laurence

“No other work on Margaret Laurence covers so much material, nor has any so successfully portrayed the different aspects of Laurence’s life and work.”

A native of Winnipeg, Lyall H. Powers studied at the Indiana University and the Sorbonne, and now teaches English at the University of Michigan (Ann Arbor). He has published widely on modern American writers, and, with Leon Edel, edited the complete notebooks of Henry James. 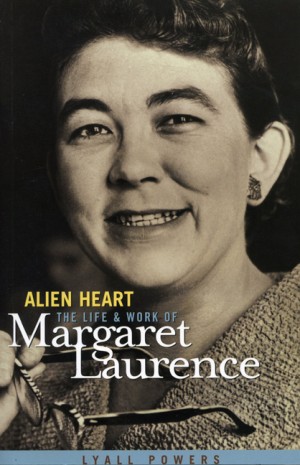