Catholic Missionaries and the Idea of Civilization in Northwestern Saskatchewan, 1845–1898

Defining Métis examines categories used in the latter half of the nineteenth century by Catholic missionaries to describe Indigenous people in what is now northwestern Saskatchewan. It argues that the construction and evolution of these categories reflected missionaries’ changing interests and agendas.

Defining Métis sheds light on the earliest phases of Catholic missionary work among Indigenous peoples in western and northern Canada. It examines various interrelated aspects of this work, including the beginnings of residential schooling, transportation and communications, and relations between the Church, the Hudson’s Bay Company, and the federal government.

While focusing on the Oblates of Mary Immaculate and their central mission at Île-à-la-Crosse, this study illuminates broad processes that informed Catholic missionary perceptions and impelled their evolution over a fifty-three-year period. In particular, this study illuminates processes that shaped Oblate conceptions of sauvage and métis. It does this through a qualitative analysis of documents that were produced within the Oblates’ institutional apparatus—official correspondence, mission journals, registers, and published reports.

Foran challenges the orthodox notion that Oblate commentators simply discovered and described a singular, empirically existing, and readily identifiable Métis population. Rather, he contends that Oblates played an important role in the conceptual production of les métis.

“This is a landmark study in the field of missionary-Indigenous relationships. Foran’s meticulously researched monograph presents a different interpretation of the role of the Oblates in the formulation of a Métis identity. Subsequent examinations of the missionary encounter will find it difficult to avoid his insightful analysis and conclusions.”

“Through creative historical analysis and careful structuring, Foran offers a fascinating, instructive, and decolonizing exploration of this precise but significant slice of Canadian and First Nations history.”

“By focusing critical attention on these scribes of early Euro-Canadian and indigenous contact, Foran has provided scholars with a fresh historical analysis of the cultural biases embedded in the key institutions—church and state—of settler colonialism.”

Timothy P. Foran received his PhD from the University of Ottawa in 2011. He has been the Curator of British North America at the Canadian Museum of History in Gatineau, Quebec, since 2013. 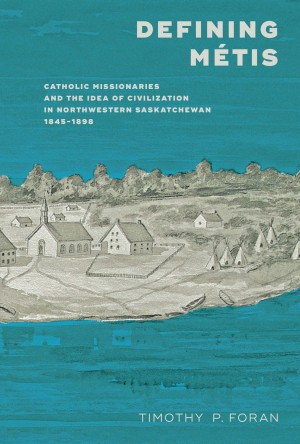