My Life with Grey Owl

Anahareo (1906-1985) was a Mohawk writer, environmentalist, and activist. She was also the wife of Grey Owl, aka Archie Belaney, the internationally celebrated writer and speaker who claimed to be of Scottish and Apache descent, but whose true ancestry as a white Englishman only became known after his death.

Devil in Deerskins is Anahareo’s autobiography up to and including her marriage to Grey Owl. In vivid prose she captures their extensive travels through the bush and their work towards environmental and wildlife protection. Here we see the daily life of an extraordinary Mohawk woman whose independence, intellect, and moral conviction had direct influence on Grey Owl’s conversion from trapper to conservationist. Though first published in 1972, Devil in Deerskins’s observations on indigeneity, culture, and land speak directly to contemporary audiences.

Devil in Deerskins is the first book in the First Voices, First Texts series. This new edition includes forewords by Anahareo’s daughters, Katherine Swartile and Anne Gaskell, an afterword by Sophie McCall, and reintroduces readers to a very important but largely forgotten text by one of Canada’s most talented Aboriginal writers.

“Anahareo has long been overshadowed by the influence of–and especially the scandal surrounding–Archie Belaney, and this is a real shame because her book is a wonderful piece of writing, one that deserves to be studied alongside other classics of Aboriginal literature such as Campbell’s Halfbreed and Mosionier’s April Raintree.”

“Devil in Deerskins was first published in 1972, and this new version, which includes forewords by Anahareo’s daughters and a lengthy afterword which gives us the historical context for her life, is the first book in a new series called First Voices, First Texts. An auspicious beginning.”

“An important literary work that deserves to be studied and celebrated by Indigenous and non-Indigenous readers. What I value most of all about Anahareo’s book is that she is a role model that counters negative hegemonic stereotypes of Indigenous women.”

“The new edition is indeed impressive: the quality of the production, including everything from paper stock to design is outstanding. It is a book that simply feels good to hold.”

“A beautifully crafted paperback edition with French flaps and a ragged paper interior. The cover design and image treatment speaks lovingly about the author’s real relationship to Grey Owl.”

“Devil in Deerskins is everything you could ever want in a memoir: humour, adventure, romance, death, separation, coming back together, journeys to find oneself…”

– Alyssa Sherlock, I Am Writer Hear Me Roar

Anahareo (1906-1985) was born Gertrude Bernard in Mattawa, Ontario. For her work in conservation she was admitted into the Order of Nature of the Paris-based International League of Animal Rights in 1979 and received the Order of Canada in 1983.

Sophie McCall is an Associate Professor in the Department of English at Simon Fraser University. 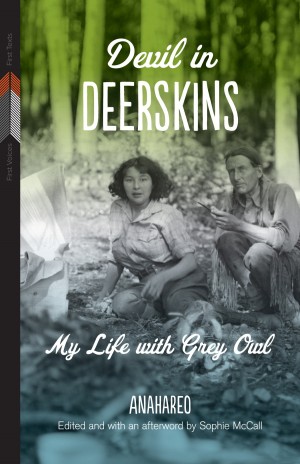