Oil is not new to Saskatchewan. Many of the wells found on farmland across the province date back to the 1950s when the industry began to spread. But there is little doubt that the recent boom (2006–2014) and subsequent downturn in unconventional oil production has reshaped rural lives and landscapes. While many small towns were suffering from depopulation and decline, others reoriented themselves around a booming oil industry.

In place of the abandoned houses and shuttered shops found in many small towns in Saskatchewan, housing developments sprang up with new trucks and boats parked in driveways. Yet people in oil-producing areas also lived amid flare stacks that made them ill, had trouble finding housing due to vacancy rates that were among the lowest in the country, suffered through family breakdown because of long working hours and time spent away from home, and endured spills and leaks that contaminated their land.

In the summer of 2014, at the height of the boom, geographer Emily Eaton and photographer Valerie Zink travelled to oil towns across the province, from the sea-can motel built from shipping containers on the outskirts of Estevan to seismic testing sites on Thunderchild First Nation’s Sundance grounds.

In text and photographs, Fault Lines captures the complexities of engagement, ambivalence, and resistance in communities living amid oil.

“Fault Lines is a lively chronicle of the ambiguities and aftermaths of Saskatchewan’s oil economy. Emily Eaton’s narrative frames the social and economic tensions of the oil boom, while placing its eventual bust within a historical context that adds depth to our understanding of the province’s resource transitions. Valerie Zink’s photographs capture the uneven effects of oil, as people struggle with new economic opportunities and potential pitfalls, and negotiate cultural change as new social forces move into the region. Together, the narrative and photographs create a striking portrait of the new social, economic, and environmental realities of Saskatchewan’s oil patch.”

“This combination of Eaton’s informative, objective text and Zink’s haunting black-and-white photography—reminiscent of classic Depression-era portraits—strikingly documents a landscape whose transition from grain silos to oil pump-jacks has received scant attention; in studies of the Canadian oil economy, the prairie province of Saskatchewan has long been overshadowed by its petrochemical giant neighbor, Alberta. “

“Zink’s photos show with plain-spoken poignancy the stark quality of the land, the oil machinery, the workers, and the farmers who have watched oil booms come and go.”

“Saskatchewan’s oil patch isn’t as infamous as the one in nextdoor Alberta. Nonetheless, it too dominates the landscapes, economy and culture of the ‘land of the living skies,’ as detailed in this collection of gorgeous full-page photographs by Valerie Zink and incisive text by Emily Eaton. Zink’s images deserve a review of their own. They manage a difficult task of capturing landscapes altered by industrial activity, showing off the intimacy of life in a trailer park, revealing the resilience and desperation of towns in disarray, of stores and homes abandoned while others are being constructed. You feel as if you’ve completed a tour of rural Saskatchewan in a few dozen frames.”

“Offers a timely look into the oil industry, the rural areas that play host to it, and the many peoples whose lives are deeply affected by the boom-bust cycles of Canada’s petrocultures. […] I suspect that Fault Lines will take its place alongside Jon Gordon’s Unsustainable Oil, the edited volumes Petrocultures and After Oil, and Geo Takach’s Tar Wars, among others, as key resources for thinking about, engaging with, and imagining beyond Canada’s oil industry.”

Raised on a farm in the foothills of Alberta, Valerie Zink received her bachelor’s in History from Dalhousie University before studying at the International Centre of Photography in New York. Her work focuses on metabolisms between people and nature, issues of economic migration and displacement, and the intersection of landscape and memory. Through photography, she seeks to reveal the ordinary ways that people struggle to live right and defend their attachment to home. She currently lives and works in Fort Qu’Appelle, SK.

Emily Eaton is an associate professor of geography at the University of Regina specializing in political economy and natural resource economies. She is also active in a variety of social justice struggles. Eaton’s first book was Growing Resistance: Canadian Farmers and the Politics of Genetically Modified Wheat. 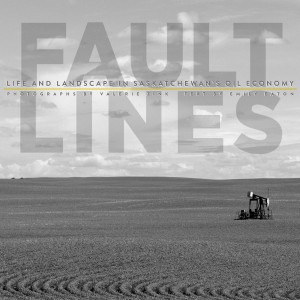