From the Tundra to the Trenches

“My name is Weetaltuk; Eddy Weetaltuk. My Eskimo tag name is E9-422.” So begins From the Tundra to the Trenches. Weetaltuk means “innocent eyes” in Inuktitut, but to the Canadian government, he was known as E9-422: E for Eskimo, 9 for his community, 422 to identify Eddy.

In 1951, Eddy decided to leave James Bay. Because Inuit weren’t allowed to leave the North, he changed his name and used this new identity to enlist in the Canadian Forces: Edward Weetaltuk, E9-422, became Eddy Vital, SC-17515, and headed off to fight in the Korean War.

In 1967, after fifteen years in the Canadian Forces, Eddy returned home. He worked with Inuit youth struggling with drug and alcohol addiction, and, in 1974, started writing his life’s story. This compelling memoir traces an Inuk’s experiences of world travel and military service. Looking back on his life, Weetaltuk wanted to show young Inuit that they can do and be what they choose.

From the Tundra to the Trenches is the fourth book in the First Voices, First Texts series, which publishes lost or underappreciated texts by Indigenous writers. This new English edition of Eddy Weetaltuk’s memoir includes a foreword and appendix by Thibault Martin and an introduction by Isabelle St-Amand.

“From the Tundra to the Trenches is a bold tale of adventure and resilience in a time of change. Journeying from James Bay mission school to the Korean War, Weetaltuk was a survivor, a trailblazer, and above all, a master storyteller.”

“Endlessly interesting; an account of a traditional way of life now lost, a gripping first-hand account of a front-line soldier during the war, and an honest account of a young man’s adventures and misadventures. It is to all our benefit that it has, at last, found its way into print.”

“Tender, honest, and often raw, Weetaltuk’s storytelling is masterful, engrossing, and deeply human. He has imbued his writing with a philosophical nuance that is characteristically Inuit: very subtle, yet profound.

“Recounts the adventures of Inuk veteran Eddy Weetaltuk, from his early life in the North to his escape to the south under an assumed identity, to his enlistment in the Canadian Forces, which took him across the Canadian West, to Japan and Germany, and into battle in Korea. Adopting the name Eddy Vital was necessary in 1951 because the federal government restricted the movement of Inuit people. Through his alias, Weetaltuk was able to see the world; in the army, he experienced equality and respect – all the while never forgetting his true identity as an Inuk. The publication history of From the Tundra to the Trenches is itself a four-decades-long saga of many twists and turns. That it now finds English publication (after first appearing in French and German) owes to the author’s conviction that his life story be read as a work of literature with the makings of a bestseller. Eddy Weetaltuk was right.”

– Jade Colbert, The Globe and Mail

“Eddy Weetaltuk’s memoir presents a completely fresh perspective on a different part of the nation’s history. From the Tundra to the Trenches follows Weetaltuk, an Inuit man from Kuujjuarapik, located on James Bay in Quebec, from his northern childhood to his experience as a soldier during the Korean War. Weetaltuk was driven to write, in part, to tell a story that has never been told. But the power in this memoir comes from Weetaltuk’s ancillary motivation to inspire and empower young Inuit, and to educate non-Inuit about the common bonds among all Canadians.”

“This memoir is a revealing account of 20th-century history as viewed through the lens of the life of one man from the Canadian North. Readers will wish that Weetaltuk, who died in 2005, had had time to write second volume about his return to the North.”

“For those interested in Inuit culture it offers the rare and valuable perspective of an Inuk looking out from his culture at the world rather than the world looking in. “

“From the Tundra to the Trenches is Eddy Weetaltuk’s lifetime achievement of publishing his memoirs. As an Inuit and a Canadian veteran of the Korean War, Weetaltuk tells a story of his early years in the Arctic with his family and his military service. Weetaltuk’s identities weave intersections of meaning between Indigenous and white ways of life.”

“Resonates with an honesty and humour that is refreshing.”

“Written in a conversational style, Weetaltuk’s text effectively demonstrates the continued, personal effects of war, particularly its impact on future personal relationships. […] The inclusion of Weetaltuk’s artwork, which he drew to represent narrative and contemporary photographs, adds an excellent visual element to the memoir.”

“Offers the rare and valuable perspective of an Inuk looking out from his culture at the world rather than the world looking in.”

Eddy Weetaltuk (1932-2005), was born on Strutton Island, James Bay. He enlisted in the Canadian Army and served in Korea. He left the army in 1967 and was stationed in Germany for many years. 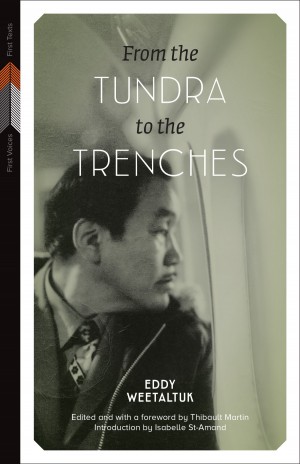