Sharing the Land, Sharing a Future

The Legacy of the Royal Commission on Aboriginal Peoples

Sharing the Land, Sharing a Future looks to both the past and the future as it examines the foundational work of the Royal Commission on Aboriginal Peoples (RCAP) and the legacy of its 1996 report. It assesses the Commission’s influence on subsequent milestones in Indigenous-Canada relations and considers our prospects for a constructive future.

RCAP’s five-year examination of the relationships of First Nations, Metis, and Inuit peoples to Canada and to non-Indigenous Canadians resulted in a new vision for Canada and provided 440 specific recommendations, many of which informed the subsequent work of the Truth and Reconciliation Commission of Canada (TRC). Considered too radical and difficult to implement, RCAP’s recommendations were largely ignored, but the TRC reiterates that longstanding inequalities and imbalances in Canada’s relationship with Indigenous peoples remain and quite literally calls us to action.

With reflections on RCAP’s legacy by its co-chairs, leaders of national Indigenous organizations and the Minister of Crown-Indigenous Relations, and leading academics and activists, this collection refocuses our attention on the groundbreaking work already performed by RCAP. Organized thematically, it explores avenues by which we may establish a new relationship, build healthy and powerful communities, engage citizens, and move to action.

“Sharing the Land, Sharing a Future provides a critical assessment of the limited progress made in implementing RCAP’s recommendations and consideration of the actions needed to move forward with the TRC’s Calls for Action – that might be a second chance to truly decolonize the situation of Indigenous peoples with homelands in the Canadian territory.

“In the current political landscape Sharing the Land, Sharing a Future is an important and necessary work that brings a wealth of scholarship into conversation with post RCAP and TRC realities. By centering the vision of RCAP and asserting decolonial pathways toward Indigenous sovereignty, it will trouble the notion of reconciliation and what that really means in a settler colonial state.”

Katherine A.H. Graham has been an active scholar on Indigenous and Northern issues for over four decades. She served in several senior research and policy roles with the Royal Commission on Aboriginal Peoples. 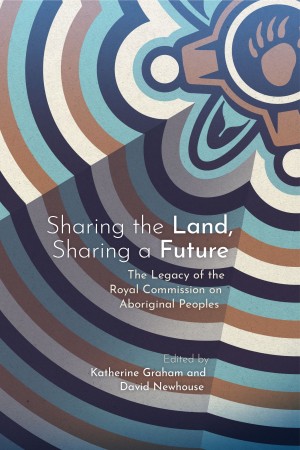