Two Years Below the Horn

In Two Years Below the Horn, engineer Andrew Taylor vividly recounts his experiences and accomplishments during Operation Tabarin, a landmark British expedition to Antarctica to establish sovereignty and conduct science during the Second World War. When mental strain led the operation’s first commander to resign, Taylor—a military engineer with extensive pre-war surveying experience—became the first and only Canadian to lead an Antarctic expedition. As commander of the operation, Taylor oversaw construction of the first permanent base on the Antarctic continent at Hope Bay. From there, he led four-man teams on two epic sledging journeys around James Ross Island, overcoming arduous conditions and correcting cartographic mistakes made by previous explorers. The editors’ detailed afterword draws on Taylor’s extensive personal papers to highlight Taylor’s achievements and document his significant contributions to polar science.

This book will appeal to readers interested in the history of polar exploration, science, and sovereignty. It also sheds light on the little-known contribution of a Canadian to a distant theatre of the Second World War. The wartime service of Major Taylor reveals important new details about a groundbreaking operation that laid the foundation for the British Antarctic Survey and marked a critical moment in the transition from the heroic to the modern scientific era in polar exploration.

“This important book offers discussion about a man whose accomplishments were ignored for far too long. Heidt and Lackenbauer’s grasp of the existing literature is extraordinary, their judgements are prudent, and the story is
fascinating.”

“This is a remarkable book about a Canadian who led an Antarctic expedition (the secret Operation Tabarin) during World War II. His manuscript was completed in the 1940s but not published until the editors of this volume found and published it. The editors are to be commended for a fine piece of work.”

“I can recommend the book to anyone who is even slightly interested in the history of Antarctica. Taylor’s autobiographical approach makes the book both personal and enjoyable to read.”

Andrew Taylor (1907–1993) was one of Canada’s foremost polar explorers. An immigrant to Canada from Edinburgh, Taylor earned his engineering degree from the University of Manitoba in 1931. Before joining the Canadian Army, he was Town Engineer in Flin Flon. MB.

Daniel Heidt is a Research Fellow as well as the Research and Administration Manager at the Centre on Foreign Policy and Federalism, St Jerome’s University.

P. Whitney Lackenbauer is a Professor in the Department of History at the University of Waterloo. 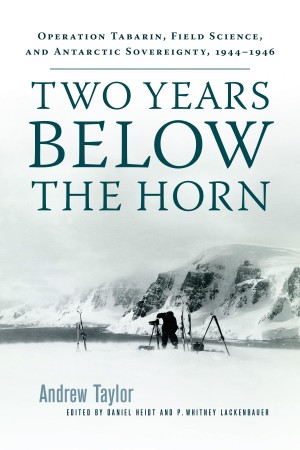