A Knock on the Door

“It can start with a knock on the door one morning. It is the local Indian agent, or the parish priest, or, perhaps, a Mounted Police officer… The officials have arrived and the children must go.”

So began the school experience of many Indigenous children in Canada for more than a hundred years, and so begins the history of residential schools prepared by the Truth and Reconciliation Commission of Canada (TRC).

Between 2008 and 2015, the TRC provided opportunities for individuals, families, and communities to share their experiences of residential schools and released several reports based on 7,000 Survivor statements and 5 million documents from government, churches, and schools, as well as a solid grounding in secondary sources.

A Knock on the Door, published in collaboration with the National Centre for Truth and Reconciliation (NCTR), gathers material from the TRC reports to present the essential history and legacy of residential schools and inform the journey to reconciliation that Canadians are now embarked upon. An afterword introduces the holdings and opportunities of the NCTR, home to the archive of recordings and documents collected by the TRC.

Audiobook narrated by Michelle St. John. Accessible audio resources for this title can be found here.

“The attempt to transform us failed. The true legacy of the survivors, then, will be the transformation of Canada.”

– Phil Fontaine, from the Foreword

“A Knock on the Door is a book that I hope every Canadian will read, and read deeply. The transformation of this country begins with acknowledging what happened after that knock on the door. Acknowledging, understanding the implications, and then resolving to do something for positive change. It’s right that the TRC Calls to Action are included, for we are all called to action.”

“Seven volumes from a nationwide inquiry into the legacy of Canada’s Indian Residential Schools have been condensed into a compelling book that is both accessible and well-documented. The central conclusion—that the schools were part of a deliberate cultural genocide policy aimed at the continent’s first peoples, spearheaded by the Canadian government with the support of mainline churches —is clearly supported by historical references, gut-wrenching personal stories, and a thorough analysis of a system that forcibly removed indigenous children from their families.”

“There are good and bad things in our society, successes and failures. But there is only one fundamental reality that remains unaddressed. That is the situation of indigenous peoples. This is the single most important issue before us, whether we are recently arrived in Canada or have been here for centuries. This is the prime issue on which we should be judging governments and potential governments.”

“This is an abridged edition of the massive six-volume report of the Truth and Reconciliation Commission of Canada that between 2008 and 2015 detailed in 7,000 interviews and 5 million documents the mental, sexual, and physical abuse of Indigenous students in boarding schools funded by the Canadian government and run by Catholic and Protestant religious groups. The schools were chronically underfunded and mostly “badly constructed, poorly maintained, overcrowded, unsanitary fire traps.” Catholic organizations ran twice as many schools as the Protestants. Students were removed from their families and usually labored at the schools for one-half day to make up for the schools’ lack of funding, and took limited academic instruction the other half. The first school opened in 1834 and the last one closed in 2000. Since then, 8,500 survivors have filed lawsuits against the government over the abuse they received. In 2006, the Indian Residential Schools Settlement Agreement was instituted to compensate students for their pain and suffering, and in 2008, Prime Minister Harper apologized for the cultural genocide inflicted on Canada’s Indigenous population. This book presents a searing story of man’s inhumanity to man.”

Phil Fontaine is a Survivor, TRC Honorary Witness, and former National Chief of the Assembly of First Nations.

The Truth and Reconciliation Commission of Canada was established in 2008 and led by the Honourable Justice Murray Sinclair (Chair), Dr Marie Wilson, and Chief Wilson Littlechild. 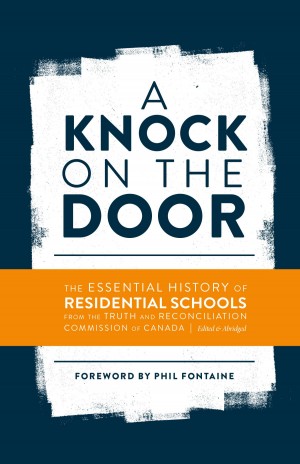