The Canadian Government and the Residential School System, 1879 to 1986

“If I were appointed by the Dominion Government for the express purpose of spreading tuberculosis, there is nothing finer in existance that the average Indian residential school.” — N. Walker, Indian Affairs Superintendent (1948).

For over 100 years, thousands of Aboriginal children passed through the Canadian residential school system. Begun in the 1870s, it was intended, in the words of government officials, to bring these children into the “circle of civilization,” the results, however, were far different. More often, the schools provided an inferior education in an atmosphere of neglect, disease, and often abuse.

Using previously unreleased government documents, historian John S. Milloy provides a full picture of the history and reality of the residential school system. He begins by tracing the ideological roots of the system, and follows the paper trail of internal memoranda, reports from field inspectors, and letters of complaint. In the early decades, the system grew without planning or restraint. Despite numerous critical commissions and reports, it persisted into the 1970s, when it transformed itself into a social welfare system without improving conditions for its thousands of wards. A National Crime shows that the residential system was chronically underfunded and often mismanaged, and documents in detail and how this affected the health, education, and well-being of entire generations of Aboriginal children.

This edition is no longer available. Please visit this page to order the new edition.

“One of the 100 most important Canadian books ever written.”

“Milloy’s book should be mandatory reading for all citizens of the Americas.”

– The Globe and Mail

“The most definitive account of how the Canadian government and churches conspired to turn a blind eye to the failings of the residential system for aboriginal children.”

John Milloy is a professor emeritus in the departments of Native Studies and History, and Master of Peter Robinson College, Trent University, Peterborough, Ontario. 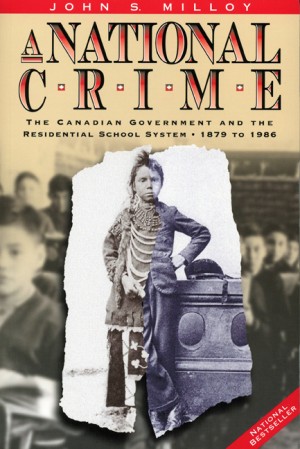