Women, Land, and the Spadework of British Colonialism on the Canadian Prairies

Sarah Carter’s Imperial Plots: Women, Land, and the Spadework of British Colonialism on the Canadian Prairies examines the goals, aspirations, and challenges met by women who sought land of their own.

Supporters of British women homesteaders argued they would contribute to the “spade-work” of the Empire through their imperial plots, replacing foreign settlers and relieving Britain of its “surplus” women. Yet far into the twentieth century there was persistent opposition to the idea that women could or should farm: British women were to be exemplars of an idealized white femininity, not toiling in the fields. In Canada, heated debates about women farmers touched on issues of ethnicity, race, gender, class, and nation.

Despite legal and cultural obstacles and discrimination, British women did acquire land as homesteaders, farmers, ranchers, and speculators on the Canadian prairies. They participated in the project of dispossessing Indigenous people. Their complicity was, however, ambiguous and restricted because they were excluded from the power and privileges of their male counterparts.

Imperial Plots depicts the female farmers and ranchers of the prairies, from the Indigenous women agriculturalists of the Plains to the array of women who resolved to work on the land in the first decades of the twentieth century.

“Carter shows how history can be well documented, provocative, and entertaining.”

“This book explains the formation of the Canadian West as a British-Canadian colony and reveals how homesteading denied property rights to women. Throughout, it offers incisive reconsiderations of what it means to be ‘Canadian,’ demonstrating that gender, race, and property have been central to the making of this country. Carter effectively moves from the macro level of national and imperial visions to the micro level of particular women. While none should be surprised that imperialism was central to the colonization of western Indigenous lands, Carter exposes just how far Canadian policymakers went to exclude married women from enjoying a right to property. By offering comparisons with the American west, we learn that the strength of this opposition was peculiarly Canadian. Indeed, before and after contact, Indigenous women were the farmers of the Great Plains. Yet after prairie reserves were established, Indigenous women were limited to kitchen gardens while white men assumed their place on the land. Imperial Plots covers the late 19th and early 20th centuries and crosses provincial and national boundaries. Sarah Carter makes a strong contribution to our understanding of Canada’s emergence as a country, illuminating ongoing struggles around gender equality, Indigenous rights, and humans’ relationships with their natural environments.”

“With Imperial Plots, Carter continues the ongoing efforts to reconceptualize the prairie west in the last decades of the nineteenth-century and the first decades of the twentieth-century. By putting the experience of Indigenous peoples and women at the centre of the story, Carter destabilizes longstanding images of a progressive, peaceful and egalitarian Canadian west.”

“In Imperial Plots, Sarah Carter continues her important research agenda of reframing the history of western settlement from the viewpoints of those excluded from the dominant historical narrative. “

“Imperial Plots provides a valuable correction to the masculinist lens through which prairie history is so often viewed.”

“This book is more than a tribute to pioneer women and a lament for lost opportunities. The present keeps peering at us through the past. Then, as now, lines drawn on maps — be they borders or homestead boundaries — determine who will and won’t have access to the resources of this world. Too much of humanity’s always-limited intelligence is devoted to plotting out the reasons why some people deserve to be one side of the line and some on the other.”

“Every chapter of Imperial Plots adds new and interesting details, many more than a brief review can cover, and their cumulative effect is enlightening. By considering the wider context so carefully and fully, Carter has made a major contribution to the scholarship on women and moved our thinking far beyond the heroism of individual homesteading women. Equally, she firmly drives a nail in the coffin of scholars who still insist that gender played no role in the formation and implementation of imperial policy. In sum, she has changed the terms of our historical questions.”

“Sarah Carter’s ambitious study of British women’s empire building on the Canadian plains takes a truly multi-national approach to questions of women’s place on the land, dealing as it does with policies and ideologies in Britain, Canada, the U.S., and elsewhere. It does an impressive job of examining the concept of ‘whiteness,’ and it appropriately fits the spirit of the Chaudhuri award, focusing as it does specifically on ‘WOMEN in rural environments.’”

“Building on her previous scholarship on farming and marriage policy on the Canadian prairies, Sarah Carter has written a bold new history of homesteading in western Canada that will be of interest not only to Canadian historians but also to scholars of gender and colonialism worldwide.”

“Historian Carter traces this history of a racialized and gendered landscape, which included her own ancestors in southwest Manitoba, from the 1870s to the 1930s.”

“An exhaustively researched book highlighting the many ways female settlers in the Canadian West worked to acquire land within a system that discouraged it. It is a strong addition to the historiography of prairie settlement especially in terms of gendered roles in settlement.”

“Imperial Plots is a scathing indictment of the power of unchecked patriarchy. Whether found in the person of Frank Oliver, the dogmatic minister of the interior, in the repeal of dower rights, or in the widely held belief that women farmers were unnatural, the systematic constraint of women is the core of this story and a tale of imperial plotting.”

“Imperial Plots, with its double meaning, is a perfect title for Sarah Carter’s investigation of women’s efforts to acquire land of their own in western Canada from 1870 to 1930.”

“Carter’s study is a rich and insightful exploration of the individuals, the organizations, and the socio-cultural dynamics involved in women’s struggles to legally and literally do the spadework of British colonialism on the Canadian Prairies.”

“A remarkable book that deserves all of the accolades that it has received, and one that continues the tradition of crafting a new western history in Canada. It will be required reading for anyone with an interest in Canadian and British Imperial history.” 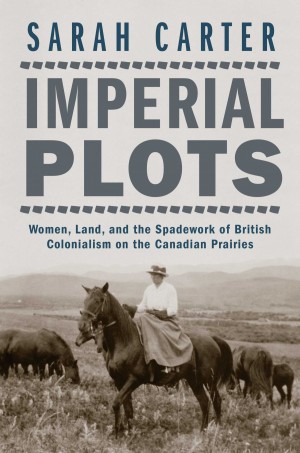