In Order to Live Untroubled

Despite the long human history of the Canadian central arctic, there is still little historical writing on the Inuit peoples of this vast region. Although archaeologists and anthropologists have studied ancient and contemporary Inuit societies, the Inuit world in the crucial period from the 16th to the 20th centuries remains largely undescribed and unexplained. In Order to Live Untroubled helps fill this 400-year gap by providing the first, broad, historical survey of the Inuit peoples of the central arctic.

Drawing on a wide array of eyewitness accounts, journals, oral sources, and findings from material culture and other disciplines, historian Renee Fossett explains how different Inuit societies developed strategies and adaptations for survival to deal with the challenges of their physical and social environments over the centuries. In Order to Live Untroubled examines how and why Inuit created their cultural institutions before they came under the pervasive influence of Euro-Canadian society. This fascinating account of Inuit encounters with explorers, fur traders, and other Aboriginal peoples is a rich and detailed glimpse into a long-hidden historical world.

Renee Fossett has a PhD in history from the University of Manitoba and was a Harington Fellow at the Centre for Rupert’s Land Studies at The University of Winnipeg. She lived in the arctic for 10 years as a community teacher. 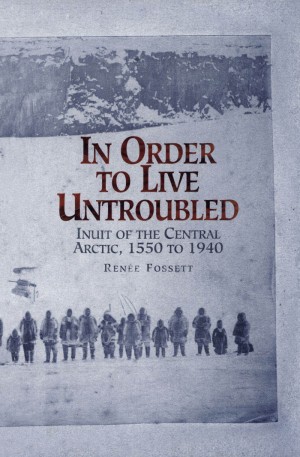