Keeyask and the Legacy of Hydroelectric Development

Beginning with the Grand Rapids Dam in the 1960s, hydroelectric development has dramatically altered the social, political, and physical landscape of northern Manitoba. The Nelson River has been cut up into segments and fractured by a string of dams, for which the Churchill River had to be diverted and new inflow points from Lake Winnipeg created to manage their capacity. Historic mighty rapids have shrivelled into dry river beds. Manitoba Hydro’s Keeyask dam and generating station will expand the existing network of 15 dams and 13,800 km of transmission lines.

In Our Backyard tells the story of the Keeyask dam and accompanying development on the Nelson River from the perspective of Indigenous peoples, academics, scientists, and regulators. It builds on the rich environmental and economic evaluations documented in the Clean Environment Commission’s public hearings on Keeyask in 2012. It amplifies Indigenous voices that environmental assessment and regulatory processes have often failed to incorporate and provides a basis for ongoing decision-making and scholarship relating to Keeyask and resource development more generally. It considers cumulative, regional, and strategic impact assessments; Indigenous worldviews and laws within the regulatory and decision-making process; the economics of development; models for monitoring and management; consideration of affected species; and cultural and social impacts.

With a provincial and federal regulatory regime that is struggling with important questions around the balance between development and sustainability, and in light of the inherent rights of Indigenous people to land, livelihoods, and self-determination, In Our Backyard offers critical reflections that highlight the need for purposeful dialogue, principled decision making, and a better legacy of northern development in the future.

“In Our Backyard illuminates the gaps between the rhetoric and realities of the approval process…and provides an important snapshot, well informed by the history of hydro development in Manitoba of Indigenous/Settler relations as they occur within the particular context of resource development in Canada.”

Jill Blakley is an associate professor in the Department of Geography and Planning and an associate faculty member of the School of Environment and Sustainability at the University of Saskatchewan. 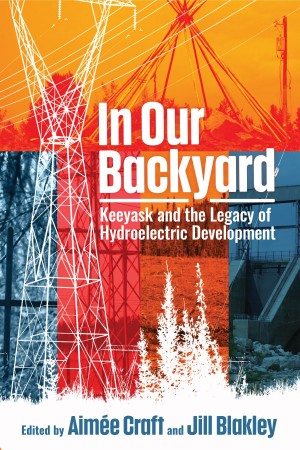