What do we know of masculinities in non-patriarchal societies? Indigenous peoples of the Americas and beyond come from traditions of gender equity, complementarity, and the sacred feminine, concepts that were unimaginable and shocking to Euro-western peoples at contact. Indigenous Men and Masculinities, edited by Kim Anderson and Robert Alexander Innes, brings together prominent thinkers to explore the meaning of masculinities and being a man within such traditions, further examining the colonial disruption and imposition of patriarchy on Indigenous men.

“Necessary reading for anyone doing work on Indigenous masculinities. It will be a touchstone in this area for some time. “

“The timely text examines the ways colonization attempted to diminish aboriginal beliefs about gender, and as a result, aboriginal traditions and values from around the world. In the midst of our imperative nation-wide discussion about missing and murdered aboriginal women, the book urges us to address how colonization has affected aboriginal men and people of other genders by creating and enforcing a patriarchal society.”

“Indigenous Men and Masculinities is unique, timely and important and expands the depth and scope of scholarly discourse on Indigenous masculinities by focusing attention on the social, psychological and political issues facing Indigenous men today as they confront colonized conceptions of manhood and the effects of colonialism on them and their communities.”

“What does it mean to be a man in the context of Indigenous culture? How has colonialism shaped notions of masculinity within traditions steeped in gender equality and mutual respect? This insightful collection of essays addresses these crucial questions and more.”

“A strong beginning to the work of critical studies of Indigenous masculinities.”

“The approaches and perspectives that Innes and Anderson have collected here are valuable for scholars, students, and teachers across the humanities and social sciences as they continue the important journey along the road to decolonization.”

“We can learn a great deal about the workings of gender and the intersections with colonialism from the examples assembled by Innes and Anderson, and Indigenous Men and Masculinities will extend conversations thoughtfully about Indigenous manhood in the twenty-first century.”

“A major strength of the collection is that these interdisciplinary contributions provide multiple ways of understanding how Indigenous men are trapped within a violent and destructive colonial narrative that makes it difficult to attain balanced and positive lives. This book is a must-read and collectively, these essays help us to conceive of ways that the ideals and social structures that shape Indigenous masculinities can be transformed, individuals can be healed, and positive change can be enacted within communities.”

Kim Anderson is a Cree/Métis writer, a Canada Research Chair in Indigenous Relationships, and an Associate Professor in the Department of Family Relations and Applied Nutrition at the University of Guelph. She has published six books, including Life Stages and Native Women: Memory, Teachings and Story Medicine and Indigenous Men and Masculinities: Legacies, Identities, Regeneration. 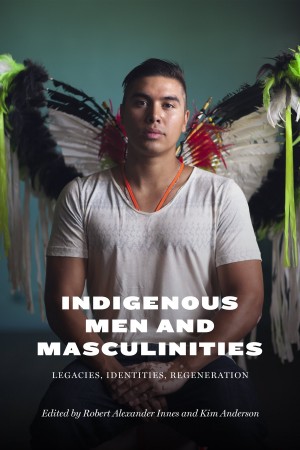