Life Among the Qallunaat is the story of Mini Aodla Freeman’s experiences growing up in the Inuit communities of James Bay and her journey in the 1950s from her home to the strange land and stranger customs of the Qallunaat, those living south of the Arctic. Her extraordinary story, sometimes humorous and sometimes heartbreaking, illustrates an Inuit woman’s movement between worlds and ways of understanding. It also provides a clear-eyed record of the changes that swept through Inuit communities in the 1940s and 1950s.

Mini Aodla Freeman was born in 1936 on Cape Hope Island in James Bay. At the age of sixteen, she began nurse’s training at Ste. Therese School in Fort George, Quebec, and in 1957 she moved to Ottawa to work as a translator for the then Department of Northern Affairs and Natural Resources. Life Among the Qallunaat was first published in 1978 and has been translated into French, German, and Greenlandic.

Life Among the Qallunaat is the third book in the First Voices, First Texts series, which publishes lost or underappreciated texts by Indigenous writers. This critical edition of Mini Aodla Freeman’s groundbreaking work includes revisions based on the original typescript, an interview with the author, and an afterword by Keavy Martin and Julie Rak, with Norma Dunning.

“Life Among the Qallunaat is a book about Mini Aodla Freeman’s journey from her small hometown to a big city for a job. The cultural transition from traditional Inuit lifestyle to modernized cities was interesting, humorous, difficult and downright honest. Her perspectives on city culture and lifestyle offers a glimpse into where humans have devolved and progressed through the eyes of an Inuk that knows a supernatural way of living. She tells her story with gentleness, honesty, humour and a love common to all people.”

“From out of the basement and into the hands of readers, Life Among the Qallunaat is funny, engaging, and honest.”

“Her stories are intelligent and curious and her history is a small piece of the large and complex history of Inuit relocation and assimilation. Her use of memoir allows these stories to become personal, and gives the reader a sense of friendship with Mini herself.”

“Part of the University of Manitoba Press’ First Voices, First Texts series, Freeman’s tale of growing up in the James Bay Inuit community and subsequent move to Ottawa to work as a translator is told in an inimitable voice with remarkable candour.”

“The interview with Freeman that opens this edition is a valuable addition. The interview provides insight into the author’s original experiences of writing and publishing as an Indigenous former Canadian government employee of the Department of Northern Affairs and Natural Resources, and is enlightening in terms of the 1960s–1970s environment in which aspiring Indigenous writers operated. This was an era in which contemporary Indigenous voices were first really acknowledged in the mainstream Canadian publishing world. But as Freeman explains, a significant proportion of her original text was cut or heavily edited. This new edition revisits parts of the original manuscript that previously never made it to print.”

“A significant addition to Canadian indigenous literature and, what’s more, a splendid read.”

“Aodla is critical of the system that thrust Inuit into southern sanatoriums without providing any communications with families in the north, and of the annual visits her band received from ‘big qallunaat who came to count how many of us were left.’ In 1960 her own band was relocated and her people lost their occupations. Aodla does not try to explain or simplify this tragic transitional era for northern Canadians. Her book is the story of a very personal journey, and it is a page-turner.”

“Aodla Freeman is the sort of writer you always want to read more of. You want to know what she thinks of things, what she reacts to, and what sort of trouble she has let herself be led into. She is charming and funny and insightful. Even with the extra sections, you are still left wanting more. It’s been almost four decades since Aodla Freeman wrote this book, and I’m very curious to know what she’s thought about all those years.”

“This revised edition of Life Among the Qallunaat make an important contribution to the canon of Indigenous autobiography, particularly as it consciously seeks to restore the author’s agency and original intents—with her permission and input.”

“Humorous, painful and poignant all at once—a great work of Indigenous literature.”

“Life Among the Qallunnat is an extraordinary work of memoir…it brings back a neglected masterwork of Indigenous literature, it provides useful context for contemporary readers, and it makes significant efforts to remove previous editorial interventions so that the author’s original intentions and cultural contexts are more faithfully transmitted to the reader.”

“More than a candid look at our culture, the book is a vivid account of [Mini Aodla Freeman’s] childhood and adolescence, of Inuit customs, of the rules which ensure their physical and emotional survival.”

Keavy Martin is an associate professor in the Department of English and Film Studies at the University of Alberta.

Julie Rak is a professor in the Department of English and Film Studies at the University of Alberta. 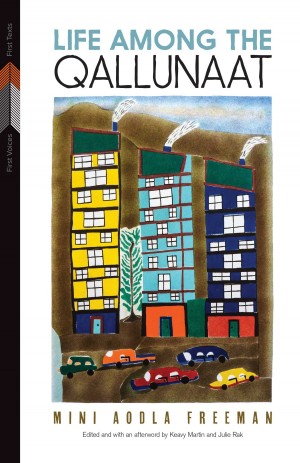