Traditional approaches to Prairie literature have focussed on the significance of “the land” in attempts to make a place into a home. The emphasis on the importance of landscape as a defining feature ignores the important roles played by other influences brought to the land such as history, culture, gender, ethnicity, religion, community, family, and occupation.

Deborah Keahey considers over 70 years of Canadian Prairie literature, including poetry, autobiography, drama, and fiction. The 17 writers range from the well-established, like Martha Ostenso and Robert Kroetsch, to newer writers, like Ian Ross and Kelly Rebar. Through their works, she asks whether the Prairies are a physical or a political creation, whether “home” is made by what you bring with you, or what you find when you arrive, and she incorporates the influences and effects far beyond landscape to understand what guides the “home-making” process of both the writers and their creations. Her study acknowledges that “home” is a complicated concept, and making a place into a home place is a complicated process.

Informed by current linguistic, feminist, postcolonial, and cultural theory, Keahey explores these concepts in depth and redefines our understanding of place, home, and the relationship between them.

Currently out of print.

“An engaging, well-written, and provocative study of prairie literature. [Keahey’s] originality lies in her choice of texts, in her grouping of those texts in unexpected and yet illuminating ways, in her exploration of the many implications of the home place. She shows that reading and writing shape and are shaped by place, and she introduces considerable subtlety into the ways place might be imagined in reading and writing.”

Deborah Keahey is an award-winning poet and writer. Born in Texas, she has lived in New Mexico, Tennessee, Alberta, Italy, and Michigan, and she currently makes her home in rural Manitoba. In addition to writing, she has taught Canadian and American literature at both the University of Winnipeg and the University of Manitoba. 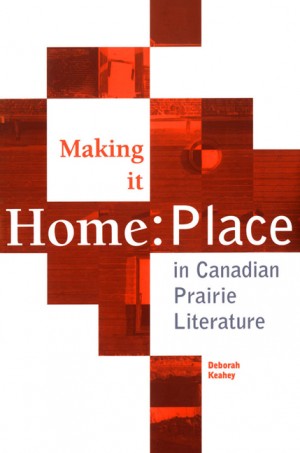