My Parents: Memoirs of New World Icelanders is a collection of essays written by second-generation Icelandic immigrants in North America, describing the lives of their parents. Originally collected in 1956 by Dr. Finnbogi Gumundsson, the first Chair of Icelandic at the University of Manitoba, seven of the fourteen memoirs are translated here from Icelandic to English. They offer a rare first-hand look into the lives of New World immigrants of the late nineteenth and early twentieth centuries. Readers are invited straight into the heart of these people’s lives, from social evenings spent reading poetry and the sagas, to the daily struggles to prepare the land and build homes. A prevailing sense of community emerges from the writers’ stories, showing how Icelandic culture and tradition sustained the immigrants through hardship, illness, and isolation. My Parents also details some of the genealogy of the New World Icelanders who settled in Manitoba, Saskatchewan, Alberta, Wisconsin, North Dakota, and Minnesota.

“This is more than just a collection of memoirs and it is more than simply an ethnic commemoration. Each of the pieces evokes sharply realized images of early Canadian and American communities and each details the process of immigration and the shifting of an European consciousness to a North American consciousness. Together, they give a vivid picture of the difficulties and joys of the early Icelandic settlers.”

– David Arnason, Department of English, University of Manitoba, and co-author of The New Icelanders

Birna Bjarnadóttir is the acting head and chair of the department of Icelandic Language and Literature, University of Manitoba.

Finnbogi Gumundsson is the former head of the Icelandic National Library in Reykjavik. 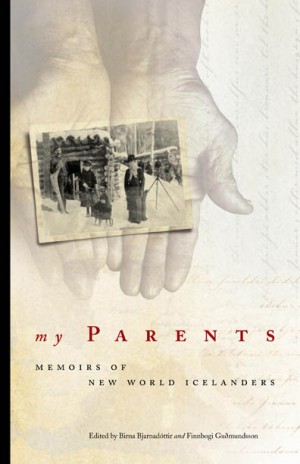