The Story of the Relocation of the Sayisi Dene

For over 1500 years, the Sayisi Dene, ‘The Dene from the East’, led an independent life, following the caribou herds and having little contact with white society. In 1956, an arbitrary government decision to relocate them catapulted the Sayisi Dene into the 20th century. It replaced their traditional nomadic life of hunting and fishing with a slum settlement on the outskirts of Churchill, Manitoba. Inadequately housed, without jobs, unfamiliar with the language or the culture, their independence and self-determination deteriorated into a tragic cycle of discrimination, poverty, alcoholism and violent death.

By the early 1970s, the band realized they had to take their future into their own hands again. After searching for a suitable location, they set up a new community at Tadoule Lake, 250 miles north of Churchill. Today they run their own health, education and community programs. But the scars of the relocation will take years to heal, and Tadoule Lake is grappling with the problems of a people whose ties to the land, and to one another, have been tragically severed.

In Night Spirits, the survivors, including those who were children at the time of the move, as well as the few remaining elders, recount their stories. They offer a stark and brutally honest account of the near-destruction of the Sayisi Dene, and their struggle to reclaim their lives. It is a dark story, told in hope.

“Night Spirits is a story of an incredible journey toward healing not yet finished. . . This is a must-read book, … well-constructed, well-written and difficult to put down. Equal credit must go to Bussidor’s collaborator, Ustun Bilgen-Reinart, a former Winnipeg journalist…It is, however, a disturbing book to read because such vivid stories of personal pain and despair will haunt you. All of the contributors, more than a dozen, are to be respected for their sheer honesty and the authors commended for their exceptional, compelling way of telling the story. … This is an important book that will make a significant contribution to the history of native peoples.”

“Ila Bussidor’s story is about struggle, it is about vision. It is so deeply personal that once told, her people will enter into a new journey; a healing journey that will involve atonement on the part of the federal government. Canadians will weep. The Dene will heal.”

“Dene writer Ila Bussidor, along with Ustun Bilgen-Reinart, a writer and broadcaster, have written a historical masterpiece, using factual information along with personal stories interwoven throughout the text.”

“Although it would be understandable, these people rarely send time on exercises in self-pity. Non-Aboriginal people and the Canadian government are not constantly used as whipping posts for their ills. Despite the dysfunctional familal situations these individuals find themselves in, a strong sense of love of family still shines through, making their stories of loss and abuse all the more tragic. Instead, the sense of being down but not out permeates several narratives. As Bussidor concludes in the book, the ‘Sayisi Dene have survived the twentieth century. [They’ll] be here to greet the twenty-first.’”

“Larry’s Party was a pleasant evening out. A Red Sea Rising is a great way to remember the disaster that was. But the real Manitoba book of the year is Night Spirits . . . Ila tells stories that leave you gasping for breath. . . . Her intensity can be frightening, but it is never as frightening as the story she has to tell. This book is a Canadian holocaust memoir. Along with journalist Ustun Bilgen-Reinart, Ila Bussidor has put together a story of government carelessness and insensitivity (which has been followed with years of denial and whitewash), heartbreaking suffering and incredible strength.”

Ila Bussidor was born in 1955, a year before the relocation. She lived in Churchill until moving to Tadoule Lake in 1973, and is a former Chief of the Fort Churchill Sayisi Dene Band.

Üstün Bilgen-Reinart is a freelance writer, journalist and broadcaster with a special interest in Aboriginal and development issues. She has produced numerous documentaries for CBC radio and television programs, including Morningside, Ideas and The Journal. 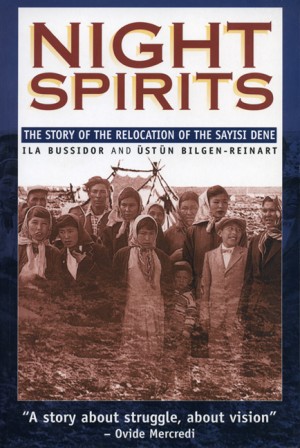