One Version of the Facts

My Life in the Ivory Tower

In his engaging memoirs, One Version of the Facts: My Life in the Ivory Tower, Dr. Henry Duckworth takes readers from his student days in Winnipeg and Chicago in the 1930s to his time as president of the University of Winnipeg (1971-1981) and chancellor of the University of Manitoba. An accomplished physicist, he wrote the first definitive text in English on mass spectroscopy, discovered the last stable isotope (platinum), and helped create important programs at universities and at the National Research Council. He also served on numerous councils for scientific and university organizations, and rubbed shoulders with Nobel Prize winners at international conferences.

With humour and modesty, Henry Duckworth recalls trends, changes, and crises he witnessed throughout his long university career. He offers his observations, his opinions, his “version of the facts,” providing a special insight into critical years in Canada’s university education history, as well as his own specialty, atomic research. 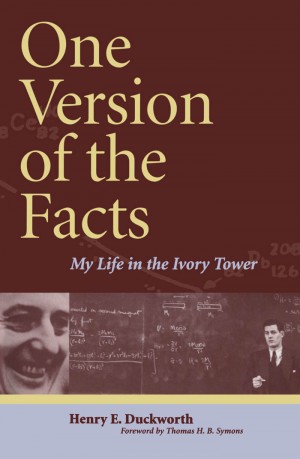