From Commemoration to Redress in Canada

Vosters brings readings of institutional, aesthetic, and activist performances of Canadian military commemoration, settler-colonial nationalism, and redress into conversation with literature that examines the relationship between memory, violence, and nationalism from the disciplinary arenas of performance studies, Canadian studies, critical race and Indigenous studies, memory studies, and queer and gender studies. In addition to using performance as a theoretical framework, Vosters uses performance to enact a philosophy of praxis and embodied theory.

“By investigating the role that government-funded museums, cultural depictions and memorializations of the military, and the Canadian sesquicentennial celebrations in 2017 play in the inculcation of civic, militarized, and settler-colonial nationalisms, Vosters challenges Canadians to both reflect and act upon the constructed narratives upon which their nation was built. […] At a time when the interrelationship between commemoration, history, and nationalism are at the forefront of many people’s minds, Vosters offers an important exploration of these vital themes. Well-written and passionately argued, Unbecoming Nationalism provides both scholars and the general public with an engaging, forceful study of the power and mutability of nationalism.”

“Examines how performance-based genres expose the myths of Canadian innocence and peaceful settlement. Committed to truth-telling, it strives to decolonize Eurocentric binaries between public and private, mind and body, theory and practice, and research and activism.”

“In this complex yet deeply personal book Vosters employs a highly original methodology, using a variety of self-directed cultural performance pieces to open a critical enquiry which challenges and refutes recent performances of Canada as nation state. Within this book, performance is writ large and involves an uncomfortable re-thinking and a fierce critique of various institutions, museums and events that perform an established nationalism. Within this passionate discussion, Vosters invites her audiences to unravel the whitewashing these performed nationalisms try to conceal. Demonstrating how the Harper government’s re-performing of Canada’s military past and the Trudeau government’s performing and performance of Canada 150 while both governments simultaneously ignored the Truth and Reconciliation Commission’s Calls to Action situates Unbecoming Nationalism as an urgent and necessary addition to our understanding how Canada is performed. Vosters book challenges the status quo, highlights contemporary performances and sites of performance that offer a counter-narrative to the official performed narrative, furthers recent explorations of architecture as performance, but most importantly challenges, no, insists, that we all do better.”

“Using examples from the Canadian War Museum, the Human Rights Museum, the Highway of Heroes, and the celebration of Canada’s 150th anniversary, Vosters (postdoc fellow, McMaster Univ., Canada) challenges the existing definitions and inclusion/exclusion of Canadian memories and memorials. The contested terrain of social and collective memory—who and what to remember and who and what to forget—shapes the discourse of nationalism, the nation, and national belonging (especially for indigenous peoples). Drawing on her background in performance studies, the author discusses state-sponsored performances of social memory and countermemorial performances that aim to “unbecome popular narratives of benevolent Canadian nationalism … toward a praxis of redress.” She challenges the image of Canada as enlightened and equitable while obscuring unbecoming acts that do not reflect the dominant discourse. Violence, human rights violations, missing and murdered women and girls, combat wars in history, and blankets of smallpox and genocide are highlighted. The author insists that attention be paid to “becoming and unbecoming performances of Canada’s military and settler-colonial commemorations,” and to reimagining who and what has been memorialized and who and what has not.”

“Unbecoming Nationalism critiques the ways in which Canadian military history is commemorated and celebrated as a way to establish favourable national mythologies and to silence uncomfortable truths about our past and our present. It also takes on narratives around white settler-colonialism and asserts that Canadians are less inclined to take responsibility for this national reality and asks what real redress would mean.”

As its enigmatic title proclaims, Vosters’s monograph sets out to problematize all facets of the
propaganda that buttress our notions of ‘white Canadian settler-colonial nationalism‘ … As a performer-activist-researcher, she wants us to participate in unravelling the deadly historic injustices committed against the Indigenous populations that continue
to be glossed over in the official versions promoted in the celebrations connected to Canada 150 in 2017.”

Helene Vosters is an artist-activist-scholar. She holds a PhD in Theatre and Performance Studies from York University, an MFA in Queer and Activist Performance from the New College of California, and is currently a Postdoctoral Fellow and Project Coordinator with Transforming Stories, Driving Change, a research and performance initiative at McMaster University. 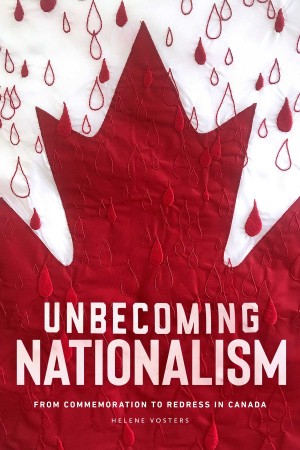