A Ukrainian Settlement in the Canadian Parkland

A social and economic history of one of the oldest Ukrainian settlements in Western Canada.

Established in 1896, the Stuartburn colony was one of the earliest Ukrainian settlements in western Canada. Based on an analysis of government records, pioneer memoirs, and the Ukrainian and English language press, Community and Frontier is a detailed examination of the social, economic, and geographical challenges of this unique ethnic community. It reveals a complex web of inter-ethnic and colonial relationships that created a community that was a far cry from the homogeneous ethnic block settlement feared by the opponents of eastern European immigration. Instead, ethnic relationships and attitudes transplanted from Europe affected the development of trade within the colony, while Ukrainian religious factionalism and the predatory colonial attitudes of mainstream Canadian churches fractured the community and for decades contributed to social dysfunction.

“There are all kinds of books about pioneering: first-person accounts from the actual pioneers; self-published works by local people with a love of an area’s history; and professional writers blending anecdote with existing research. Lehr provides both fresh and aggregated research, lightly mixed with anecdote. It’s a great addition to the canon of history and cultural books on Manitoba.”

“John Lehr has produced a work that deserves to be read by every serious student of the settlement process, the “frontier,” western Canadian history, ethnic history and – oh, yes – Ukrainian Canadian history.”

“Community and Frontier is an excellent cultural history, highly recommended.”

“Community and Frontier focuses on one of the earliest settlements in Western Canadian history, the Ukrainian colony of Stuartburn in southern Manitoba. Author and University of Winnipeg geography professor John C. Lehr takes a unique approach to writing a community history, combining detailed social and economic analysis with lively anecdotes about colonists selling Seneca root to New Yorkers and frog legs to Minnesotans, and about the making home-brewed beer and whisky. Maps created by cartographer Weldon Hiebert illustrating the population growth of Stuartburn from its founding in 1896 into the early 1900s, as well as the transportation routes, trade, and settlement patterns throughout the region, add to Community and Frontier‘s unique effectiveness as a scholarly local history. Both an intelligent and entertaining read, Lehr’s book is an important addition to the history of early settlement in Western Canada.”

John C. Lehr is a professor in the Geography Department of the University of Winnipeg. 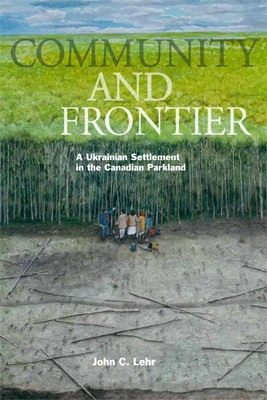