Manitoba has been at the crossroads of many of the important debates and events in Canadian history. From the early fur trade to the Riel Rebellion to the Winnipeg General Strike, Manitobans have frequently played crucial roles in Canadian and sometimes world history.

Until now, there has been no comprehensive, contemporary source for information on the many Manitobans who have left their mark on history and society. The Dictionary of Manitoba Biography fills this gap, with biographical sketches of over 1700 Manitobans who have made an impact in politics, the arts, sports, commerce, agriculture, and society during their lives. It is an invaluable resource for scholars, students, and general readers interested in Canadian history. Particular emphasis has been placed on reflecting Manitoba’s ethnic and social diversity, and on including men and women who were notable in their own day but have now been forgotten. Many entries also refer the reader to additional references for further reading.

More than a reference book, Dictionary of Manitoba Biography is also a fascinating work of history in its own right, which presents the full and colourful scope of over 300 years of people in Manitoba history and social life, from premiers and mayors to nightclub owners and sports heroes. 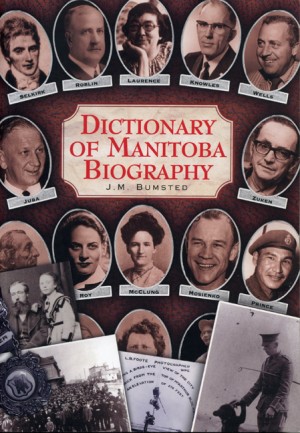