The history of the twentieth century is one of modernization, a story of old ways being left behind. Many traditionalist Mennonites rejected these changes, especially the automobile, which they regarded as a symbol of pride and individualism. They became known as a “horse-and-buggy” people.

Between 2009 and 2012, Royden Loewen and a team of researchers interviewed 250 Mennonites in thirty-five communities across the Americas about the impact of the modern world on their lives. This book records their responses and strategies for resisting the very things—ease, technology, upward mobility, consumption—that most people today take for granted.

Loewen’s subjects are drawn from two distinctive groups: 8,000 Old Order Mennonites, who continue to pursue old ways in highly urbanized southern Ontario, and 100,000 Old Colony Mennonites, whose history of migration to protect traditional ways has taken them from the Canadian prairies to Mexico and farther south to Belize, Paraguay, and Bolivia.

Whether they live in the shadow of an urban, industrial region or in more isolated, rural communities, the fundamental approach of “horse-and-buggy” Mennonites is the same: life is best when it is kept simple, lived out in the local, close to nature. This equation is the genius at the heart of their world.

“One of the great strengths of Horse-and-Buggy Genius is Loewen’s success in finding ways to see (and allowing the reader to see) beyond the modernists’ gaze to explore the contours of life as it has been experienced by Old Order and Old Colony Mennonites.” ”

“This volume offers a valuable opportunity for students of religion to hear rare Old Order voices and perspectives on religion. Highly recommended.”

“Royden Loewen’s new book examines how Old Colony and Old Order Mennonites try to maintain religious and cultural changelessness in a world that celebrates change. But Horse-and-Buggy Genius also provides a lens for all of us to examine our own worldly assimilation.”

“Horse and Buggy Mennonites are a group of antimodern agrarian Mennonites that, like the Amish, have shunned much of modern technology in favour of plain dress and community living. By separating themselves from the world, these antimodern Mennonites are often used as pawns in wider political and theological agendas. For some, they represent the essence of moral, community-minded, environmentally sustainable, and peaceful living. For others, they represent a socially regressive, patriarchal society at odds with the progress made in the modern world. Loewen is neither ignorant nor dismissive of these tensions; rather than viewing these Mennonites through the lens of a particular agenda, he creates space for the voices of these communities to speak on their terms about how they view their approach to life. The result is an account of Horse and Buggy Mennonites that neither romanticizes nor dismisses their way of life. This is the genius of Loewen’s book.”

“Royden Loewen’s Horse-and-Buggy Genius cuts against the grain by treating plain Mennonite groups as historical communities, each with their own usable past that shapes decisions and perspectives in the ongoing struggle of Mennonites with the challenges of modernity.”

“Offers seldom heard perspectives on traversing boundaries, both geographic and societal, while pushing readers to examine more deeply their own navigation of cultural norms.”

“There is much here to consider in this well-written and enjoyable book.”

“I am not aware of any book that captures the complex interaction between Old Order and Old Colony Mennonites with modern society with the range and depth that this one accomplishes. In a way, the author has lifted the veil on a great deal of the mystery that surrounds the internal lifestyle of these people.”

“Using the methods of oral history, Royden Loewen seeks to give voice to the nearly 110,000 Mennonites in motorized Canada and Latin America who still travel in carriages.” 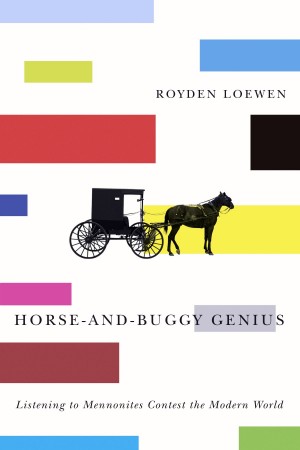