Inuit Stories of Being and Rebirth

Gender, Shamanism, and the Third Sex

Ujarak, Iqallijuq, and Kupaaq were elders from the Inuit community on Igloolik Island in Nunavut. The three elders, among others, shared with Bernard Saladin d’Anglure the narratives which make up the heart of Inuit Stories of Being and Rebirth. Through their words, and historical sources recorded by Franz Boas and Knud Rasmussen, Saladin d’Anglure examines the Inuit notion of personhood and its relationship to cosmology and mythology.

Central to these stories are womb memories, narratives of birth and reincarnation, and the concept of the third sex—an intermediate identity between male and female. As explained through first-person accounts and traditional legends, myths, and folk tales, the presence of transgender individuals informs Inuit relationships to one another and to the world at large, transcending the dualities of male and female, human and animal, human and spirit.

This new English edition includes the 2006 preface by Claude Lévi-Strauss and an afterword by Saladin d’Anglure.

“The strongest point of the book is its rich capacity to generate analyses of Inuit story and life. While many works provide different Indigenous stories from across Canada, this text goes further and provides variants of and insight into the stories themselves.”

“The new English edition of Inuit Stories of Being and Rebirth: Gender, Shamanism, and the Third Sex — translated from the French by Peter Frost — is a major accomplishment. This is one of the great classics of humanities and social science research in the Canadian Arctic.”

“The real strength of the book are the dialogues between d’Anglure, Iqallijuq, and Ujarak that provide insights into many of the stories provided by Kupaaq … providing one of the first Inuit commentaries on their own texts.”

“Saladin d’ Anglure […] shares a philosophical perspective that sex and gender play interchangeable roles as a means of Inuit survival. The stories describe Inuit perceptions of sex and gender in ways that are unlike Western binary concepts of sexual and gender identity. […] This book is a lens that can allow a glimpse into Inuit knowledge systems and offers a rare account of how Inuit established social structures and unity among the sexes prior to European contact. While some of the practices of naming have changed in a post-modern Inuit context, the stories and analysis by Saladin d’ Anglure imply that unity among the sexes is an important aspect of how Inuit have survived as a distinct Indigenous people within some of the harshest environmental living conditions on earth.”

Bernard Saladin d’Anglure first began his work among the Canadian Inuit in the 1950s, when he was a young student from France. He later became a professor of Anthropology at the University of Laval, where he taught until his retirement.

Other contributors: Preface by Claude Lévi-Strauss. 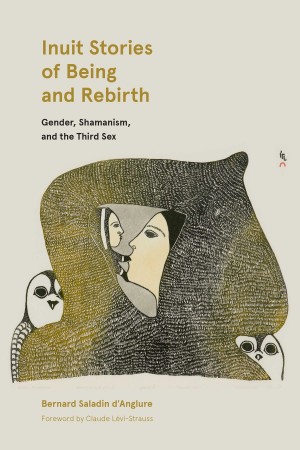