Legends of the Capilano

Alongside photographs and biographical entries for E. Pauline Johnson, Joe Capilano, and Mary Capilano, editor Alix Shield provides a detailed publishing history of Legends since its first appearance in 1911. Interviews with literary scholar Rick Monture (Mohawk) and archaeologist Rudy Reimer (Skwxwú7mesh) further considers the legacy of Legends in both scholars’ home communities. Compiled in consultation with the Mathias family, the direct descendants of Joe and Mary Capilano and members of the Skwxwú7mesh Nation, this edition reframes, reconnects, and reclaims the stewardship of these stories.

Shield has skilfully opened up a new avenue to the past with potentially wide-ranging appeal both to scholars and students and to general readers.

E. PAULINE JOHNSON (1861−1913), known also by her Kanien’kehá:ka name Tekahionwake, was a widely known poet, performer, and writer born on Six Nations of the Grand River territory (near Brantford, Ontario).

JOE CAPILANO (c.1854−1910), known also by his Skwxwú7mesh name Sahpluk, was a Skwxwú7mesh leader, activist, and orator from Xwmelch’sten (Capilano Reserve no. 5 in North Vancouver, BC).

MARY AGNES CAPILANO (c.1840–1940), known also by her Skwxwú7mesh name Lixwelut, was a Skwxwú7mesh matriarch (and wife to Joe Capilano) known for her activism and leadership in the Skwxwú7mesh community. 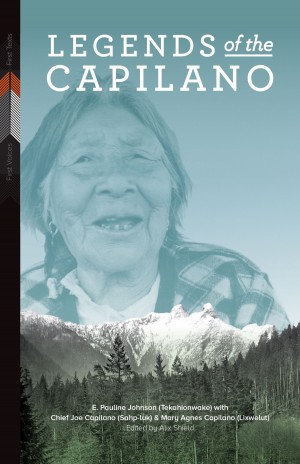