I Keep the Land Alive

Labrador Innu cultural and environmental activist Tshaukuesh Elizabeth Penashue is well-known both within and far beyond the Innu Nation. The recipient of a National Aboriginal Achievement Award and an honorary doctorate from Memorial University, she has been a subject of documentary films, books, and numerous articles. She led the Innu campaign against NATO’s low-level flying and bomb testing on Innu land during the 1980s and ’90s, and was a key respondent in a landmark legal case in which the judge held that the Innu had the “colour of right” to occupy the Canadian Forces base in Goose Bay, Labrador. Over the past twenty years she has led walks and canoe trips in nutshimit, “on the land,” to teach people about Innu culture and knowledge.

Nitinikiau Innusi: I Keep the Land Alive began as a diary written in Innu-aimun, in which Tshaukuesh recorded day-to-day experiences, court appearances, and interviews with reporters. Tshaukuesh has always had a strong sense of the importance of documenting what was happening to the Innu and their land. She also found keeping a diary therapeutic, and her writing evolved from brief notes into a detailed account of her own life and reflections on Innu land, culture, politics, and history.

Beautifully illustrated, this work contains numerous images by professional photographers and journalists as well as archival photographs and others from Tshaukuesh’s own collection.

“Tshaukuesh’s diary is sad, funny, resolute, eloquent, and real. Anyone interested in Innu traditional life and the struggle of the Innu today will want to read about the life of an Innu woman who fights for her people and the land, and who never, ever gives up.“

“Here is the diary of a living legend. It is also a diary for today, an invitation to follow the steps of our ancestors through a single Innu woman whose love for the land never falls apart even within the biggest struggle storms of our time. The Innu people always believed in dream and imagination to travel through lands if physically we couldn’t. We can walk now with Tshaukuesh Penashue.”

“The book Nitinikiau Innusi: I keep the Land Alive, shows how one woman can make a difference. It shows how Mrs. Penashue protested against Low level flying and gives a first hand account on how it affected her people and the land. She talks of her love of the land and how much she loves it. She shows that being on the land was more healthy for people than it is these days. She shows that there was nothing in their hunting, fishing or gathering that ever caused damage or disease to a person, in fact she shows how the land helped people heal. This is a heart breaking but moving book to read for living in Labrador and helps to understand the Innu way of life.”

“The writing is simple but contains a poignant core underneath its surface. “

“Tshaukuesh (Elizabeth) Penashue’s book is a diary-based account of her efforts to preserve the way of life of her people, the Labrador Innu; it provides a vivid picture of their collective traditions while emphasizing her personal objectives for the work she has undertaken. The format of the book, developed with editor Dr. Elizabeth Yeoman, gives us not only her life but her times, showing the stages of Innu political activism and environmental concerns from the late 1980s until the present day.”

Tshaukuesh Elizabeth Penashue is well known as a cultural and environmental activist. Her work has been recognized by a National Aboriginal Achievement award, an honorary doctorate from Memorial University, and numerous media interviews and profiles, articles and consultations.

Elizabeth Yeoman is a Professor in the Faculty of Education, Memorial University. 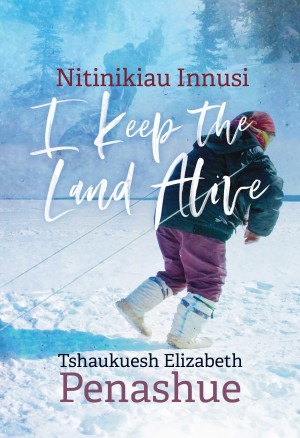